It currently shows Spaces on top along with Fleets. 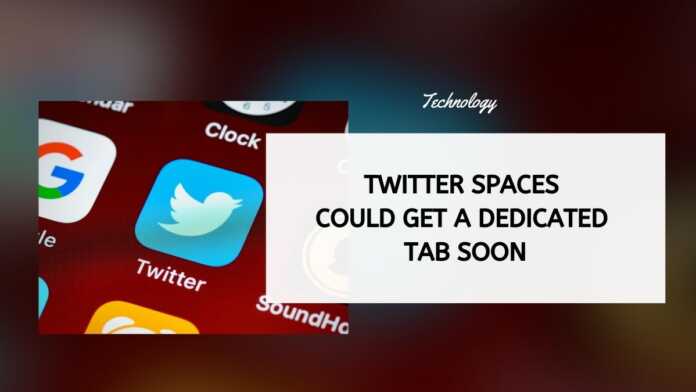 Twitter is working on a dedicated tab for its Clubhouse-rival, Spaces. Twitter Spaces is currently clubbed with Fleets that appear on top of the timeline. It could soon get a dedicated tab on the Twitter app.

The Twitter Spaces tab will be part of the bottom menu on the Twitter app, according to a screenshot posted by Jane Manchun Wong. The Spaces icon which is multiple circles forming a diamond shape is spotted at the center with the home and search buttons on the left side, and notifications and DM on the right. A dedicated Twitter Spaces tab would make the feature more visible to users.

Twitter is working on a dedicated page/tab for @TwitterSpaces pic.twitter.com/ggXgYU6RAf

So unless people are informed about it there’s no way of discovering it on the app. Twitter will possibly launch the dedicated tab for Spaces when the feature is widely available to all users.

Twitter Spaces is available for all users on Android and iOS but only as listeners. Select people on iOS have the ability to start a Space. Twitter plans to make this available to all users soon. Similar to Clubhouse, the host has control over the space they’ve created.

The host has control over who can speak in the Space. They can choose from everyone, people you follow or invite-only certain people to speak. They can also revoke speaking permissions from participants in the Space.

There’s a limit of up to 11 people including the host who can speak in a Space. Listeners can also be invited through the Space link that can be shared via DM, tweet or any other platform. Even if you don’t follow that person you can still join the Space if you have the link.

Twitter Spaces launching globally might give it an edge over Clubhouse which is iOS-only and based on invite-only entries although it isn’t too difficult to get one.