Twitter users can now add stickers, GIFs, and Twemojis to their Fleets. 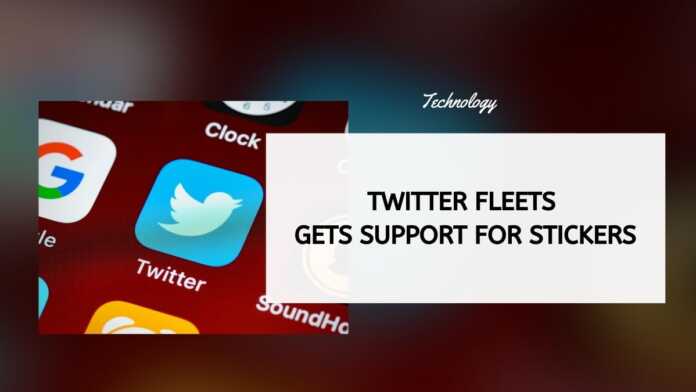 Twitter has added a new feature to its Snapchat Stories-like Fleets. The new feature lets users add stickers to their Fleets. Twitter first started testing this for users in Japan, and it has now launched it globally for all users on Android and iOS.

Twitter is offering animated stickers, emoji which it’s calling Twemoji, and GIFs that users can add to their Fleets. The new feature can be accessed by tapping on the smiley face icon at the bottom row of the Fleets screen.

Here, users will find a series of stickers and emoji that one can choose from and add to their Fleets. There’s also a search bar on top where users can type keywords to look for specific stickers and emoji. This also pulls up the GIF library which is sourced from Tenor and Giphy.

These stickers, Twemojis, and GIFs can be added on top of any image or video that will go up as Fleets. The stickers can be moved around and can be resized as well.

It’s similar to how stickers work on Snapchat and Instagram Stories so there’s really nothing new about it. But the new feature does give users more options to edit their Fleets.

Twitter launched Fleets with very limited editing capabilities. It lets users add different colored text, keep a background, and that’s about it. So the addition of stickers should be a big update for Fleets.

Your Fleets just got an upgrade.

Now you can express yourself in the conversation with stickers. Add GIFs and Twemojis to a Fleet by tapping the ? icon, on Android and iOS. pic.twitter.com/Ihh9ZZh70a

Twitter last month also added the option to disable replies to Fleets. Reactions and replies to Fleets show up in DMs, and users now have the option of disabling this in case they don’t want it. Twitter is expected to roll out more features for Fleets in the future.