Twitter has fixed the annoying issue of disappearing tweets as you read on your phone. 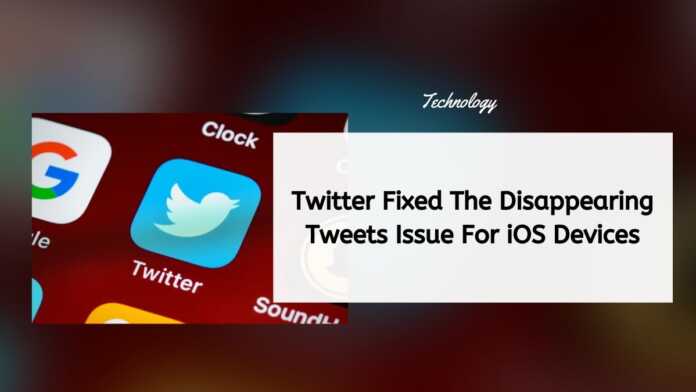 Twitter took to Twitter to announce rolling out the fix for the iOS app. Hence, going forward, iPhone users should not see the tweets disappear right before their eyes while reading. There’s no update for the Android version yet but you can expect it soon, as Twitter Support says.

“We’ve made some updates on iOS to prevent Tweets from disappearing mid-read. Now when you pause your timeline scrolling to look at a Tweet, it should stay put!” says Twitter.

The issue was generally related to how the platform deals with refreshes when someone else comments on it. Twitter explained earlier that issue crept up when a particular conversation gets more replies and the Twitter algorithm pushes it up to the top as the latest conversation clip.

Let’s talk about Tweets disappearing from view mid-read when the timeline seems to auto-refresh. We know it’s a frustrating experience, so we’re working on changing it.

Over the next two months, we’ll be rolling out updates to the way we show you Tweets so they don’t disappear.

With the new update, tweets should now stay as you are reading them. The improvement has been visible on the web client of Twitter and we are yet to experience it on the mobile side.

“Now you can choose when you want new Tweets to load into your timeline – click the Tweet counter bar at the top,” said Twitter Support earlier for implementing the fix on the web version.