The company is also bringing the ability to search through message content later this year. 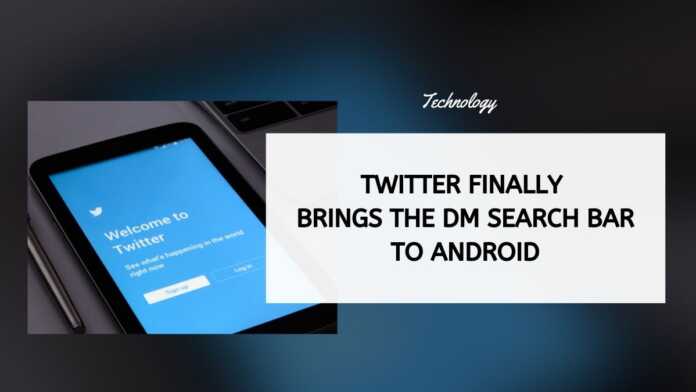 Twitter is finally rolling out the DM search bar on Android, two years after it introduced the feature for iOS users. This feature will let Twitter users on Android search for DMs through the name of the user or groups they’re part of. Twitter is also rolling out an improved version of its DM search tool.

The search bar in Twitter DMs will pull up conversations based on the name of the user or groups. This feature is helpful as it will let users quickly search for conversations instead of having to scroll through the entire inbox.

It’s also quite surprising that Twitter took so long to bring the DM search bar to its Android app. But then again Twitter doesn’t do much about inbox. It is working on improving it though.

We’ve brought the DM search bar to Android and are rolling out an improved version that lets you search for all of your old convos, not just the most recent ones.

Waiting for the option to search your DMs for message content? We’re working on releasing that later this year! https://t.co/wAQxSokJt6

Later this year, Twitter will make it possible to search for DMs through message content. So you’ll actually be able to type words and DMs that contain those words will show up in the search result. This would be an even easier way to search for specific DMs on Twitter.

It’s also improving the search tool by letting you search for all your old conversations, and not just the most recent ones. So if you have a bunch of DMs, Twitter will pull up all of them and not only the latest ones.

Twitter also started testing voice DMs earlier this year in India. The feature is simple as it basically means sending voice messages in DMs on Twitter. It’s still important as it comes as a major update for Twitter DMs. Twitter is yet to announce plans of rolling it out globally.