Tumblr has updated its hate speech policy to remove reblogs of millions of posts that endorsed hate speech. 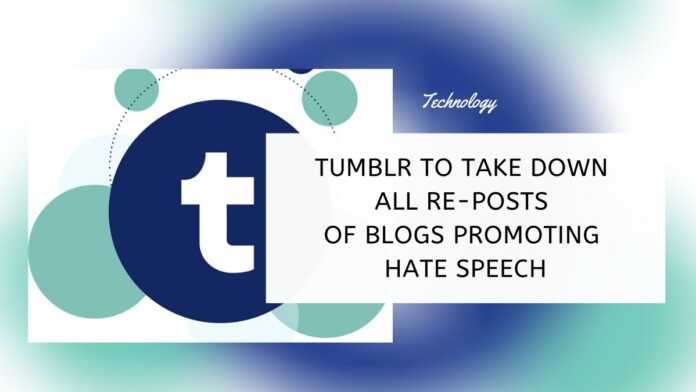 Tumblr is the latest social networking platform to crack down on content that promotes hate speech. The company on Monday announced it will be removing re-posts of the blog that endorsed hate. Tumblr said that it has already begun the process of removing such blogs.

“You care about this place, and you let us know when something doesn’t feel right. Many of you have called on us to further reevaluate how we deal with hate speech, particularly hate speech from Nazis or other white supremacist groups,” said Tumblr in a blog post.

The company pointed out that the re-posts remained active on Tumblr even though the original posts were deleted upon blog termination.

“We identified nearly a thousand blogs that were previously suspended for blatantly violating our policies against hate speech. Most of them were Nazi-related blogs.

Earlier this week, we began the process of removing all reblogs stemming from the original posts on those previously suspended blogs—that’s approximately 4.47M reblogs being removed from Tumblr,” it added.

Tumblr in its post acknowledged that there’s no foolproof way to weed out the harmful content or could be solely trusted on algorithms or Artificial Intelligence. The company further announced setting up a new Trust & Safety team to make it easier for users to report such content.

TechCrunch in its report points out that Tumblr has made some important changes after it was acquired by Automatic, the parent of WordPress. One of the biggest moves was to take down NSFW content.

Since the decision, Tumblr’s traction has taken a hit in terms of daily active users, unique views, total visitors, and so forth. The report also said that the young demographic of Tumblr has also moved to other platforms such as TikTok which are mostly video-centric.