Top 10 Tech And Computer Magazines For Every Tech Lover 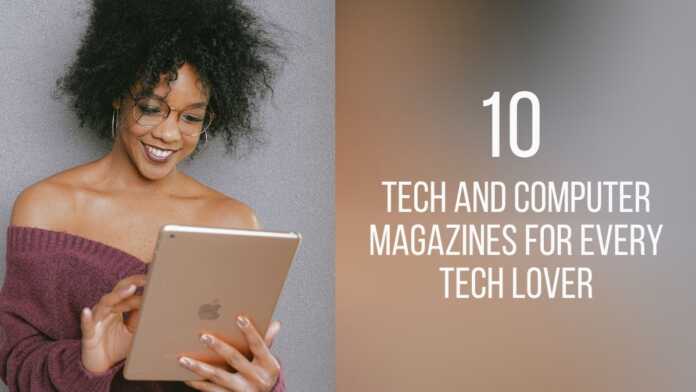 Computers have come a long way since the invention. Everything we see today from the internet to the satellites orbiting the earth, is controlled by computers. Technology has gone as far as to put small computers in the palms of all of our hands, that are capable of spreading knowledge and connecting the world.

In the pursuit of building cost-effective, powerful computers, we go through a lot of information at once and a better source to get computer knowledge is from computer magazines.

Here is a list of top computer magazines that will give you all the information on current trends and happenings around the Tech field. Further, these magazines provide gadget reviews, How to Tips, and solutions to commonly encountered problems.

PC World is a computer magazine that keeps on giving the best tech information. Being one of the best, it contains reviews, news, articles, tutorials, and tips and tricks about the latest and greatest in the technology world.

Further, it keeps you updated with news on the latest gadgets to hit the market and also the ones to avoid. Both software and hardware related topics are covered by the magazine.

Since 2013, the magazine does not have a print version but is available online as digital versions.

WIRED is the ultimate source of all technology that discusses the Latest Gadgets and Articles related to Science and technology. It does not treat technology as an isolated topic but rather relates politics, economics, and a lot of other topics into its publications.

From search engines to driverless cars, WIRED has interesting topics for anyone interested in the marvels of technology. The latest trends, gadgets, reviews, news, and a flashy undertone is what separates WIRED from the rest. WIRED is a monthly publication and the subscription charges are different for the USA and other countries.

In December 2006 the publisher changed to Belltown Media, Inc. in Houston, Texas. Since 2017, the publisher was Linux Journal, LLC. located in Denver, Colorado.

With Linux magazine, you will get to know the news around Linux and Opensource software. You can read reviews about the latest Opensource Software’s, Linux Distributions, and Linux How-To Articles.

CNET magazine is not merely a computer magazine as it takes a broad outlook on the technology that encompasses your life. This magazine focuses not only on the devices that change the future but also on the people who helped bring that change.

CNET magazine is a unique combination of carefully crafted reviews, computer tips and tricks, interviews, and a whole lot more. All types of technological devices are covered by CNET magazine. It is a quarterly publication.

Maximum Computer is the perfect magazine for you if you are looking to build a computer. From the detailed product reviews and step by step guides on how to build your machine, Maximum Computer has you covered for all your custom build needs.

There are tweaking guides and overclocking tutorials to satisfy even the most seasoned computer enthusiasts. You can also find deal prices for build components in the magazine.

With reviews and advice from the experts, this magazine can help you build your best machine without breaking the bank. Maximum Computer magazine is the ultimate helper in your DIY computer building projects and to get the best out of your system.

PC Magazine is one of the oldest and most trusted magazines in the PC community. This magazine contains in-depth software and hardware reviews, tech news, advisory articles and everything in between. PC Magazine is among the best sources for all tech news.

This magazine’s print edition was published from 1982 to January 2009. Publication of online editions started in late 1994 and continues to this day. Now it comes with a monthly publication.

MacLife is a computer magazine that focuses on Apple’s ecosystem. Get the latest about upcoming products, tutorials, software reviews, app reviews, tech reviews, and anything that is Apple-related.

The magazine provides tips and tricks on how to get the most out of your devices and software. Initially, the company started out as MacAddict, later changing its name to MacLife.

MacLife magazine is for Apple device enthusiasts which give you the best advice to make better purchases decisions and ensures your devices live long. It comes with a monthly publication.

The NET magazine is specifically catered towards graphic designers, software, and website developers. If you are a coder, graphic designer, or a seasoned developer, this is the computer magazine you should get.

With the latest trends in the coding and design world, the magazine offers everything you need to know about coding, design, and other topics.

During its beginnings, the magazine was targeted towards the internet users to acclimatize them. So if learning about all the information about computers and gadgets then NET magazine is where you will find your information.

T3 magazine is a UK-based technology magazine, which specializes in gadgets, gizmos, and other technology. It carries topics about the latest gadgets on the market, reviews, to be released gizmos, technology news, and a whole lot more.

First launched in 1996, T3 stood for Tomorrow’s Technology Today, but this is not used anywhere in the magazine or on the website anymore except for on the side of the magazine. It is exclusively referred to as T3 or T3.com. This magazine is one of the largest technology-based magazines in the UK and releases a total of 13 issues per year.

Computerworld is one of the oldest computer magazines in the market which provides all the information you need about computers, Macs, cloud computing, new technology-related topics.

Computerworld also publishes reviews, tips and tricks, and news about the world of technology. As of 2014, the magazine discontinued its print version and moved to digital versions over the internet.