Spotify started testing this feature last year with select artists and now it's available for all artists on the streaming platform. 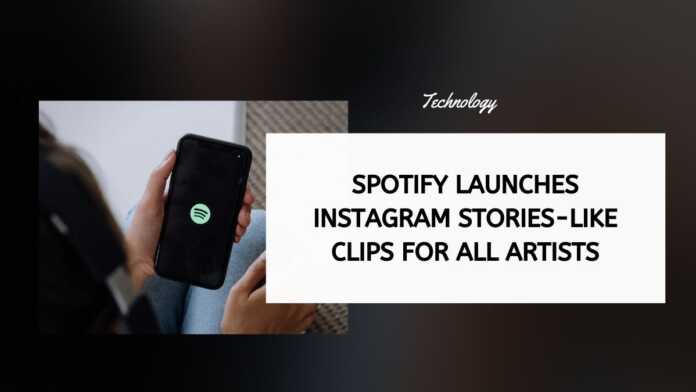 Spotify started testing Snapchat-like stories last year with select artists on the platform. At its Stream On event, Spotify officially launched the feature calling it “Clips.” Spotify Clips lets artists post short videos that they can put up on playlists.

This feature is similar to how Snapchat Stories work, and what we’ve seen recreated on Instagram, Facebook, Twitter, and even LinkedIn. On Spotify, artists can put up short videos to “share intimate moments” with their fans on select Spotify playlists.

Spotify listeners will have to tap on the display picture of the artist which will have a green circle around it and a prompt to “Tap to see the story.”

Spotify Clips will debut on even more Spotify playlists, featuring artists in short videos that let them put their own stamp on a playlist experience ? #SpotifyStreamOn pic.twitter.com/sgHTWV244W

The functionality is the same where you can tap on the screen to move to the next story. It however lacks features such as replying or reacting to stories that are available on platforms like Instagram.

There’s still an option to report stories on Spotify Clips. The entire experience is completely controlled by the artists, and for users, it’s only for viewing purposes.

Another feature that Spotify had been testing has been made official, and available for all artists. It’s called “Canvas” and it lets artists make video loops of their album art.

Using Canvas, artists can make 3 to 8-second clips of their album art that will keep playing in the loop. Artists can also customize them using other images. Billie Eilish used animated versions of fan art for each of her tracks on Spotify. This feature is now available for all artists on Spotify.