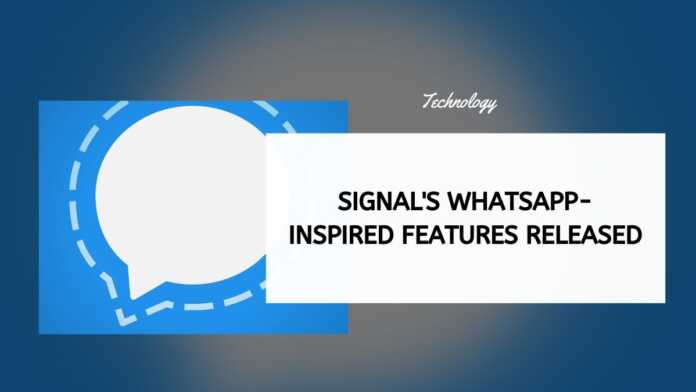 Signal new features are now live in the stable version of the app. Firstly, the messaging app has added custom chat background colors as well as allowing users to set their own background images. You can now pick from 12 colors, plus nine gradients.

Thankfully, Signal has retained the option introduced in the beta titled “Dark theme dims wallpaper”, which is pretty self-explanatory the moment your phone sets the theme to dark mode, Signal will tint the wallpaper inside the app ever so slightly, so lighter wallpapers won’t blind you at night.

Chat wallpapers have arrived! Customize wallpapers for each of your chats or just set a default background for everyone if your patience is wallpaper thin. Now available in Signal 5.3 for Android and iOS. pic.twitter.com/IxAxQUCm9n

Another feature that was present on both Telegram and WhatsApp for the longest time was animated stickers. Signal is usually a little late to the party when it comes to adding features like these – but for good reason.

The app’s developers only add in features (like searching for GIFs) when they are sure it can be implemented in a way that doesn’t negatively impact a user’s privacy.

Tell your friends what’s going on or share something new “About” yourself in your Signal Profile. Now available in Signal 5.3 for Android and iOS. pic.twitter.com/rSl8xblBry

The last (but certainly not the least requested) feature to make it into the stable version of the app is an ‘About’ section under a user’s profile.

Essentially a throwback to the days of computer messengers and BlackBerry messenger where you could inform your contacts what you were up to, the About section has been on both WhatsApp and Telegram for years. However, Signal promises that even this part of your Signal profile will be end-to-end encrypted, which is great news.

You have more followers than you think, but Signal is different. It’s built for you even though we know nothing about you. #WeKnowNothing #DataPrivacyDay pic.twitter.com/Ty85yrfCKj

Signal also posted a funky video ‘commercial’ on Friday (Data Privacy Day) featuring actor Taraji P Henson, informing users that they had more followers than they thought and that Signal was different, seeing as it doesn’t know anything about its users.

The video ends with Henson telling her viewers “Protect their s**t. Download Signal, ya’ll’, while zooming into a signboard that says no personal data was bought or sold in the creation of the video.