Samsung brings out its own wiping cloth to troll the iPhone maker. 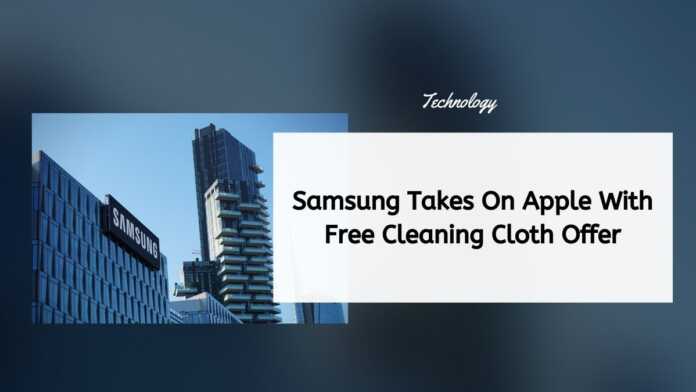 Apple’s new Polishing Cloth has taken the world by storm, and as usual, the internet has been at its best trolling the company for hyping up a wipe cloth and selling it at an exorbitant price.

After all those years of trolling the iPhone’s lack of headphone jack and the charger, Samsung is now taking a jibe at the Apple cloth with its own cloth. While Apple is charging $19 for its Polishing Cloth, Samsung poked fun at Apple’s premium offering by giving away free polishing cloths to buyers.

According to the Dutch blog Galaxy Club, Samsung users were able to request a “velvety soft cleaning cloth” for their phones through the company’s Members app in Germany. At least 1,000 wipes were available and now are gone.

Obviously, the Samsung Cloth is larger than Apple’s version at 20 cm x 20 cm and is meant to clean the dust off the Samsung Galaxy devices.

As if this was not enough, Samsung apparently shared the following message in the Members app. “The Samsung Galaxy care cloth: 20 x 20cm in size and velvety soft. It cleans the display of your Samsung Galaxy or other surfaces such as B. Monitors. It is available free of charge for you as a Samsung member.” Apple may have gone Ouch.

“Click on “Register now”, follow the further steps of registration and if you are one of the first 1000 participants, you will receive a Samsung Galaxy cleaning cloth in the mail after your data has been successfully checked,” said Samsung in the following statement.

Unlike Apple, Samsung isn’t actually selling this as a commercial product. This is just a part of a limited-run campaign to make fun of Apple, and possibly ascertaining once again how Samsung’s ecosystem is logical and smarter.