This feature would enable Galaxy smartphone and tablet users to share their files with their Windows 10 PCs easily. 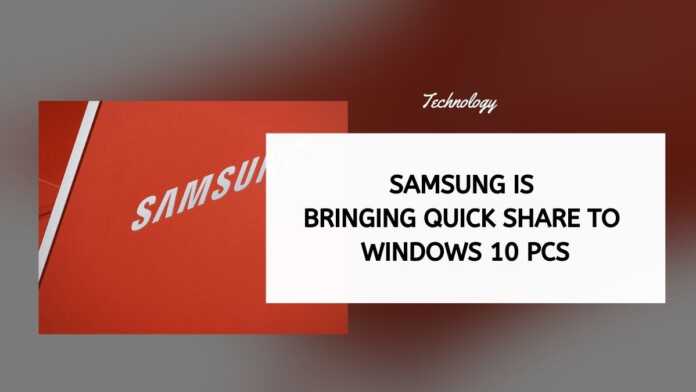 Samsung last year introduced a feature called Quick Share that enables users to share files directly between their Galaxy smartphones. Now, word is that the company is planning to extend the scope of this feature beyond the Galaxy smartphones to the Windows 10 devices.

Samsung and Microsoft have strengthened their partnership over the past few years. Your Phone and Link to Windows apps are some of the ways we have seen that partnership benefit the users. Now, as per a report by Sam Mobile, both the companies are gearing to launch the Quick Share feature for personal computers running on Windows 10.

When released, this feature would enable Galaxy smartphone and tablet users to share their files with their Windows 10 PCs easily. That said, it remains unclear when such an app would be launched for Windows 10 PCs.

But those are not the only two apps that the company is working on. Neowin reports that Samsung is working on two more apps called Samsung Free and Samsung O.

The publication says that Samsung Free is a sort of successor to Samsung Daily, which is the feed that users see on the left side of the company’s One UI launcher. The app has a News section for news stories, a Play section for some free games, and a Watch section for Samsung TV Plus, where it is available.

As of now, it remains unclear if the company is planning to develop connectivity between the mobile and the PC versions of the app. Lastly, Samsung O. The publication reports that it is similar to Samsung Free. The exact utility of this app remains unclear at the moment.

Samsung hasn’t released any of the three apps at the moment. So, it remains to be seen when the company would make them available to the users.