Samsung has already started rolling out the update to the Tab S7 series - including the Samsung Galaxy Tab S7 and Galaxy Tab S7+. 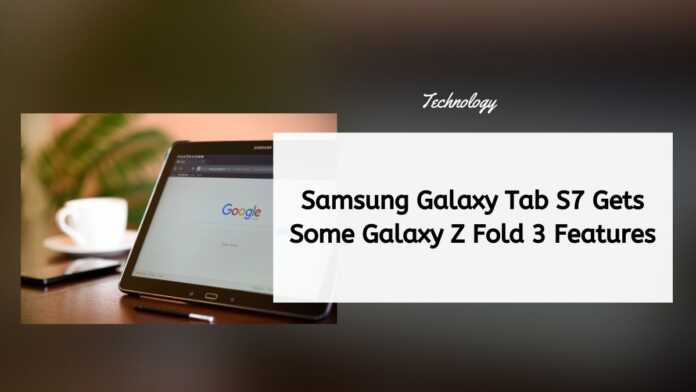 Samsung released the new Samsung Galaxy Z Fold 3 with a slew of new features, thanks to One UI 3.1. The new foldable smartphone got features that allowed users to perform quick multi-tasks on their device. Samsung seems to be backporting some of the features with One UI 3.1 to other devices in its portfolio.

The Samsung Galaxy Tab S7 is getting a new One UI 3.1 update. Samsung has already started rolling it out to the Tab S7 series – including the Galaxy Tab S7 and Galaxy Tab S7+. Both the devices will now get access to the Labs feature that was earlier exclusive to One UI 3.1.1 on the Galaxy Z Fold 3.

It will be useful for those trying to use the Galaxy Tab S7 for work and multitask on the go. The multi-window feature makes all the apps open in either pop-up view or split-screen, which makes it an easy job to multitask on a device that’s meant for work and entertainment.

You also get a persistent taskbar that can be used to pin your favorite apps. This will allow you to switch apps without having to go back to the app drawer.

Samsung is now rolling out update to the Samsung Galaxy Tab S7 and Galaxy Tab S7+ owners. If you are one of them, you should get the new update that goes by the firmware version T87xXXU2BUC6 It is now being rolled out in multiple regions. The Galaxy Tab S7 FE should be the next in line to receive this update and get the Galaxy Z Fold 3 features.

For now, it is also getting the new build with version T73xXXU1AUH6. You can head to your update center to find the notification of the new firmware update.