Court slapped Google with an unprecedented fine of nearly $100 mn, while Meta received a fine of $27 mn. 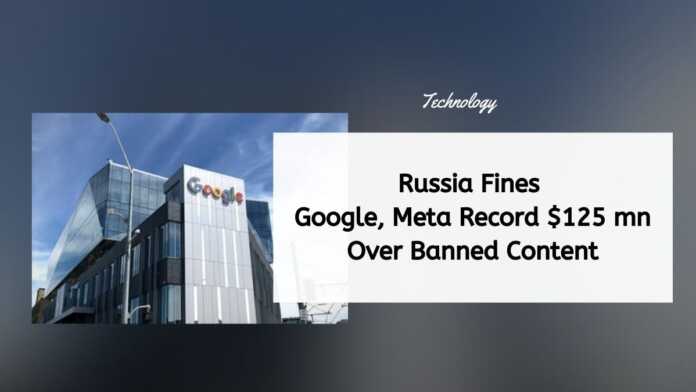 A Moscow court slapped Google with an unprecedented fine of nearly $100 million, while Meta received a fine of $27 million. In recent years Russia has been piling pressure on Western social media giants, with President Vladimir Putin saying those companies were becoming as influential as elected governments.

Moscow has repeatedly taken legal action against them for allegedly not moderating their content properly and interfering in the country’s affairs.

But so far fines on Facebook parent company Meta and Google have stretched into the tens of millions of rubles, not billions. However on Friday a Moscow court fined Google a record 7.2 billion rubles ($98 million), while Meta (formerly Facebook) received a fine of 1.9 billion rubles ($27 million) for repeatedly failing to delete illegal content.

“For the first time, a Russian court has imposed fines that make up a share of the annual revenue of these companies in Russia,” Russia’s state communications regulator Roskomnadzor said in a statement.

The regulator said that Google and Meta had “ignored multiple demands” to remove materials that incite religious hatred and promote views of “extremist and terrorist organisations”, among other violations.

Kremlin critics have accused authorities of muzzling independent media, saying now the government is zeroing in on the internet, considered the last bastion of free speech in Russia.

“We’ll study the court documents and then decide on next steps,” Google’s press service told AFP on Friday. There was no immediate comment from Meta.