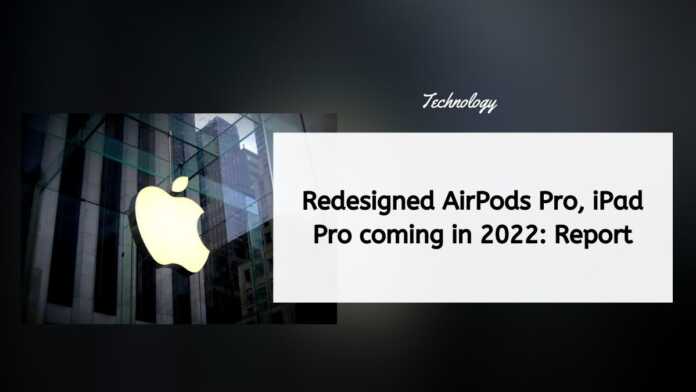 Apple recently announced the iPhone 13 series, a new iPad mini, iPad, and the Apple Watch Series 7. Within a week of the iPhone 13 lineup going up on pre-orders, the rumour mill is buzzing with 2022 Apple products.

The latest report reveals that Apple is working on redesigning several of its offerings. It is said that the company could redesign its MacBook Air, AirPods Pro, iPad Pro, and more in 2022.

As per Mark Gurman of Bloomberg, there is a lot in store for us from Apple. The company may announce exciting updates to the Apple Watch, Mac Pro, MacBook Air, AirPods Pro, and iPad Pro. Moreover, we could get our first look at the company’s anticipated mixed reality headset.

“2022 is certain to be a stronger showing, with as many as three new Apple Watch models, a major iPhone upgrade, revamped Mac Pros and MacBook Airs with Apple Silicon, new AirPods Pro earbuds, and an updated iPad Pro design. Oh, and don’t forget a potential preview of Apple’s future mixed-reality headset,” wrote Gurman.

The reporter goes on to say that other products like a foldable iPhone and HomePod/Apple TV combo are also in the pipeline. However, hose devices aren’t expected for at least a few more years.

“Also don’t ignore what else the company has cooking in its labs: an all-new home device that combines a HomePod with an Apple TV and FaceTime camera, Apple Watches with even more health sensors, a foldable iPhone and true AR glasses. I wouldn’t start clamoring for any of these yet, though, as all of them are probably still between two and four years away,” he added.

Gurman and Bloomberg’s Debby Wu previously reported that the new AirPods Pro will feature new motion sensors for fitness tracking. They also said that the company has tested a smaller design that eliminates the stems below the earbuds.

As for the iPad Pro redesign, we could see the device getting a new glass back with wireless charging support and the ability to charge AirPods by placing them on the back of the iPad Pro.