Oculus Working On A Smaller, Lighter Version Of Quest

Quest may get multiple successors. Some variants in the works come with a smaller and lighter form factor. 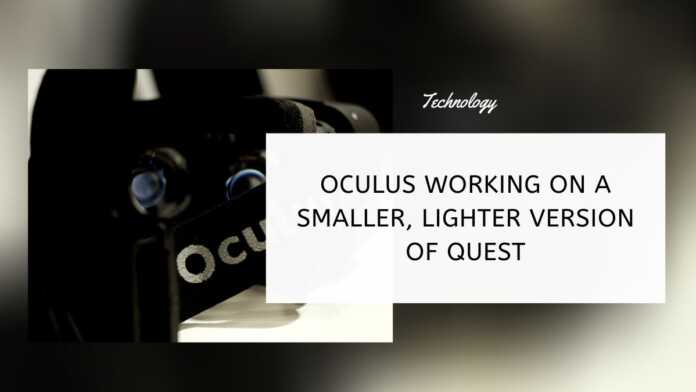 Facebook Inc.’s Oculus division is building a new version of its Quest standalone virtual reality headset, but the device is facing potential delays due to the impact of Covid-19 on product development and the global supply chain.

The social-networking giant is working on multiple potential successors to the Quest. Some models in advanced testing are smaller, lighter, and have a faster image refresh rate for more realistic content, according to people familiar with the matter.

These headsets also have redesigned controllers, said the people, who asked not to be identified discussing unannounced products.

The company hasn’t finalized which new version of the Quest it will release, and the final product may have different features. Facebook originally planned to launch the new model at the end of 2020, around its annual Oculus Connect conference, but the coronavirus pandemic could delay the headset from shipping until 2021, the people said.

Some versions in testing are 10% to 15% smaller than the current Quest. That, in addition to being lighter, makes them more comfortable to wear, one of the people said.

The existing model weighs about 1.25 pounds, which is too heavy for some users wearing the device for extended periods. The models in testing are closer to a pound, the person said.

The company could sell the new model alongside the current Quest, or choose to fully replace it. A Facebook spokeswoman declined to comment on future products.

For the new Quest device, Facebook is testing the removal of the fabric from the sides and replacing it with more plastic like the current Oculus Rift S. It’s also considering changing the materials used in the straps to be more elastic than the rubber and velcro currently used, according to the people familiar with the matter.

The Oculus Quest line is Facebook’s mid-range VR headset that doesn’t require a connection to a smartphone or PC. At $399, the current model is cheaper than Facebook’s most-powerful headset, the Rift S, which connects to a computer.

Facebook also still sells the Oculus Go, an entry-level headset that runs on a smartphone chip. The Quest line uses a higher-end part made by Qualcomm Inc.

Facebook was the No. 2 seller of VR headsets last year with about 28% of shipments, trailing Sony Corp., according to data compiled by Statista.