Nokia hasn't revealed the exact date of availability yet. 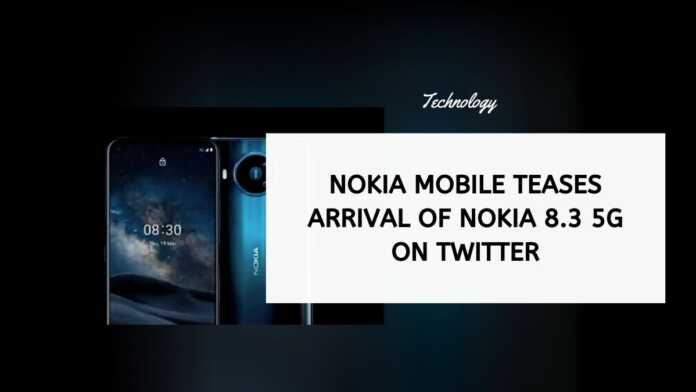 HMD Global in an online event back in March this year had announced the Nokia 8.3 5G along with the Nokia 5.3, Nokia 1.3, and the Nokia 5310 smartphone.

It has been over two months but the phone, that is, the Nokia 8.3 5G, is yet to make a debut in the international markets. But that could change soon.

The company has teased a video from its official Twitter handle, which hints that the phone could be arriving in various countries across the globe soon.

The 15-second long video lays emphasis on the design of Nokia’s upcoming smartphone and it ends with the message – “Nokia 8.3 5G, the first 5G device, Soon available.”

Ready for 5G? The soon available Nokia 8.3 5G allows you to play games without distraction, stream films and share content – all in 5G ???? pic.twitter.com/mjXeilVxeh

The video, however, doesn’t reveal the market or the countries with the company would launch its first 5G smartphone. It also doesn’t give the exact date of launch.

The Nokia 8.3 5G comes with a 6.8-inch display. It is powered by the Qualcomm Snapdragon 765G chipset that is coupled with up to 8GB of RAM and up to 128GB of storage space.

Further, it features a quad-rear camera setup consisting of a 64-megapixel primary shooter, a 12-megapixel ultra-wide-angle lens, a 2-megapixel macro sensor, and a 2-megapixel depth sensor.

The Nokia 8.3 5G has a 24-megapixel camera in the front that is housed inside the phone’s punch-hole display. The phone is backed by a 4,500mAh battery. The phone comes in only the Polar Night color variant.