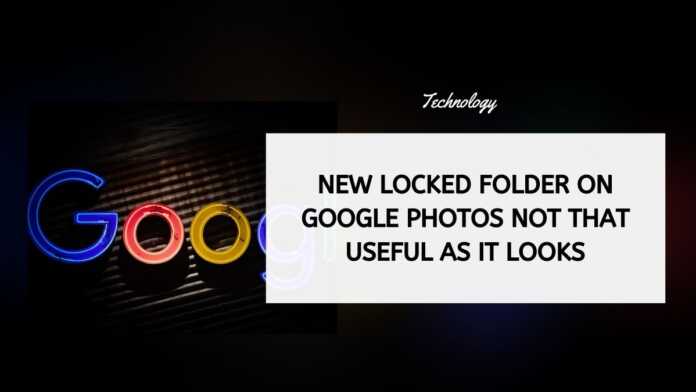 One of the sections on Google I/O’s pre-show was about Google Photos where the company announced a bunch of upgrades coming in. Given that Google Photos is going to become paid from June 1, this is a good time for the upgrades to roll in.

One of these new upgrades is the Locked Folder and we’ve told you about this already. Now, as more details are emerging, as Android Police points out, there are some deal-breakers here and this feature might not be as great as we thought it would be.

For starters, the Locked Folder is purely local on your smartphone and there are no cloud backups available for this. Google Photos is yet to add “one of the most trivial features many other, local-only galleries have had for a while now”.

With Locked Folder in @googlephotos, you can add photos to a passcode protected space and they won’t show up as you scroll through Photos or other apps on your phone. Locked Folder is launching first on Google Pixel, and more Android devices throughout the year. #GoogleIO pic.twitter.com/yGNoQ8vLdq

The Locked Folder in Google Photos is located under the Utilities section that is under the Library bottom tab. It uses the screen lock feature as a security measure and you can choose between using biometric authentication or a PIN/pattern for the Locked Folder.

You will have to set up either of them to use the Locked Folder. This “tie-in” with the phone’s security is one of the reasons why the Locked Folder is local. So as soon as you move the images you want from your Photo Library to this folder, they are deleted from the Google Photos cloud storage and kept only in the protective environment of your phone. If you lose or break your phone, you lose access to all these photos in the Locked Folder.

This Locked Folder is good for sensitive images of account numbers, documents, ID cards, etc, and also for other NSFW images. Once you move these images into the folder, they disappear from the timeline and also from any other place in Photos.

When you view an image from the Locked Folder, you only get two options – Delete and Move. The second option of ‘Move’ is for editing, sharing, or trashing images. Also, you will not be able to search or create albums inside the Locked Folder. So if you have a whole bunch of images inside, you will have to manually scroll through them all.

The Locked Folder is coming to Pixel devices first, and then to other Android phones. Pixel smartphones will also allow you to save images right from the camera app to the Locked Folder.