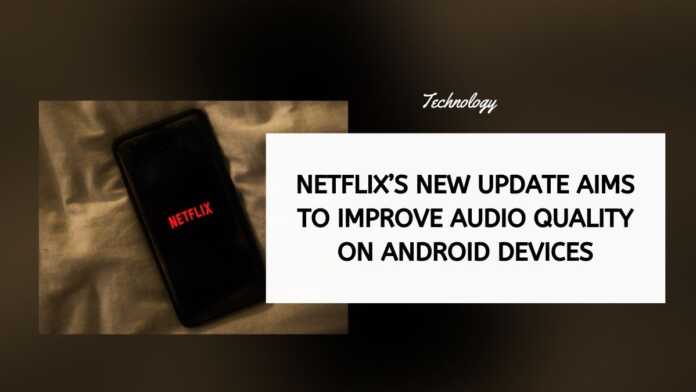 Netflix rolled a new update that aims to improve the audio experience on Android smartphones. The update brings Extended HE-AAC with MPEG-D DRC (xHE-AAC) for Android devices, with version 9.0 and above. According to Netflix, the new capability will bring studio-quality sound on compatible Android devices.

“With its capability to improve intelligibility in noisy environments, adapt to variable cellular connections, and scale to studio-quality, xHE-AAC will be a sonic delight to members who stream on these devices,” said Netflix in a blog post.

Apart from auto audio optimization, the upgrade also focuses on loudness management. This basically allows users to play all titles at a consistent volume.

“The loudness metrics of all Netflix content are measured before encoding. Since our goal is to play all dialogue at the same level, we use anchor-based (dialogue) measurement, as recommended in A/85. The measured dialog level is delivered in MPEG-D DRC metadata in the xHE-AAC bitstream, using the anchorLoudness metadata set. In the example from Figure 3, the action show would have an anchorLoudness of -27 dBFS; the documentary, -20 dBFS,” Netflix added.

Netflix pointed out that the platform has been using adaptive video bitrate for years. The audio bitrates, however, were fixed mainly because of the codec limitations. In 2019, the company first introduced adaptive bitrate audio on TVs.

The xHE-AAC’s native support for seamless bitrate switching has now allowed the platform to introduce the same for Android devices.