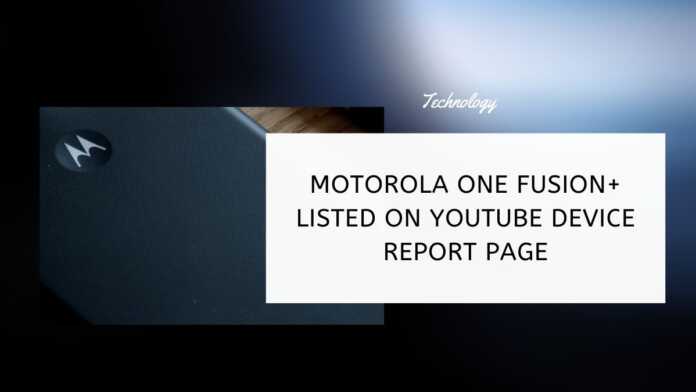 A new Motorola smartphone called One Fusion+ is reportedly in the works as it has appeared on the YouTube Device Report page. This is a public page where YouTube lists recommended devices for the platform.

According to the YouTube listing which was first spotted by XDA Developers, Motorola One Fusion+ will feature a 6.5-inch full HD display.

The listing also reveals the launch timeline for Motorola One Fusion+ will be sometime next month. There’s an image of the phone as well but it’s of the Motorola Edge+ which launched recently. But the Motorola Edge is listed with a wrong image which could very well be of the One Fusion+.

According to XDA Developers, Motorola One Fusion+ is expected to pack 6GB of RAM and 128GB of storage space. More details include a 64-megapixel primary camera and color options of ‘Cloud’ and ‘Sugarfrost’. There’s no official word on the new Motorola phone as yet but the launch seems imminent.

The smartphone is also said to house a quad-camera setup with a 48-megapixel primary sensor accompanied by 8-megapixel, 5-megapixel, and 2-megapixel sensors.