Leaked Microsoft Surface Go 3 specs include a 10.5-inch full-HD display, which is the same as the predecessor. 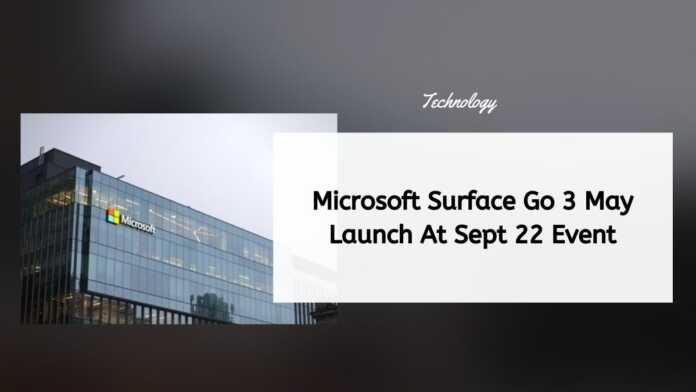 Microsoft recently announced that it will be hosting a Surface hardware event on September 22. It will be held virtually at 11 am ET. It is important to note that Microsoft has not yet revealed the list of devices it is planning to unveil at the forthcoming event. However, the company could announce a wide range of Surface products at the event.

The latest development comes from a German publication WinFuture.de that reports Microsoft Surface Go 3 may come in two different models. Both these models are expected to be powered by Intel chips.

Other leaked Surface Go 3 specs include a 10.5-inch full-HD display, which is the same as the predecessor. It is likely to be made of magnesium alloy. Like the Surface Pro, and the previous Surface Go devices, the Surface Go 3 will feature a fold-out stand.

Other information regarding the upcoming Surface Go tablet is yet to be detailed. For the unaware, the Surface Go lineup is Microsoft’s entry-level Surface tablet lineup. It doesn’t boast the same level of specifications as the Surface Pro series.

As the September 22 event, Microsoft is said to launch a variety of Surface devices. It could introduce the Surface Duo 2 – the successor of its foldable Surface Duo, which received criticism for its software experience. However, the device was also hailed for its hardware. It included two OLED displays and a 360-degree hinge mechanism.

The Surface Duo 2 could be powered by the Qualcomm Snapdragon 888 SoC, have 5G support and run Android 11 out of the box. It is expected to come with a price tag of $1,399. Microsoft is also tipped to launch the successor of its Surface Pro X.