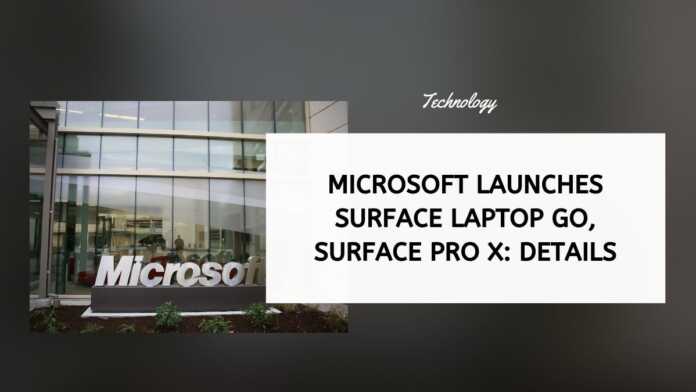 Microsoft launched its most affordable Surface laptop starting at $549 in the US. Called Surface Laptop Go, the device is aimed at students and those with tight pockets.

With this, the company plans to offer the best of Microsoft software services and apps. It also launched the upgraded Microsoft Surface Pro X priced at $1,499.99. Both will be available starting October 13 in the US.

Sporting a light-weight design, the Surface Laptop Go sports a metal build with ice blue, platinum, and pinkish-gold color variant and has a fingerprint sensor to log in. This is powered by Windows Hello biometric authentication.

Besides this, it delivers 13 hours of battery life and a 10th-gen Intel Core i5 processor. It has a 12.4-inch PixelSense touchscreen with an aspect ratio of 3:2 and 1536×1024 pixels resolution. The device features up to 256GB of storage and up to 16GB RAM.

Some of the ports included in the Surface Laptop Go Laptop is a USB Type-A port, a USB Type-C port, a 3.5mm headphone/microphone combo jack, and a Surface connector. It also has a 720p webcam, Omnisonic speakers with Dolby Audio tuning, and Wi-Fi 6 support.

As for the battery, the product is claimed to run for up to 13 hours on a single charge.

The updated laptop features the same design as its predecessor. However, the real update is on the inside. This time, the Surface Pro X comes with Microsoft’s new SQ2 processor, which is said to be designed in collaboration with Qualcomm.

As per Microsoft, the SQ2 is the company’s fastest chipset ever that brings more powerful performance while using less battery. The firm has also made improvements to Windows on ARM. This includes updates and optimizations to the Visual Studio Code.

There’s a 13-inch PixelSense screen with 2880×1920 resolution, up to 16GB RAM, up to 512GB SSD, and a battery life of up to 15 hours. There are dual far-field microphones too along with 2W stereo speakers with Dolby Audio and Wi-Fi support.