Microsoft has announced it is going to adjust the release cycle for the Edge browser to match Google Chrome’s release plan. 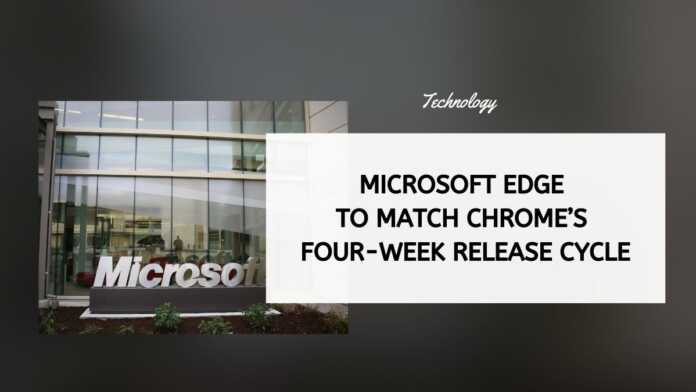 Google had announced just earlier this month that it was working on speeding up the release cycle of Chrome’s updates to four weeks, up from the current six-week period. This decision was taken to keep an eye on improving the security, speed, and stability of the browser.

Now, Microsoft has decided to do the same and is going to adjust the release cycle of the Microsoft Edge browser to match Google Chrome’s.

“As contributors to the Chromium project, we look forward to the new 4-week major release cycle cadence that Google announced to help deliver that innovation to our customers even faster,” Microsoft said in a blog post.

This upgraded release cycle will go into effect with Edge 94 which is expected to be launched by September. Google has also promised to make the switch with Chrome in Q3 and move to Chrome 94, but unlike Microsoft, Google has not given a specific month for this shift to happen.

Like Google, Microsoft is also going to offer enterprise customers an option to opt for longer release cycles under the Extended Stable schedule. Under this, there is going to be a new release every eight weeks.

However, enterprises will have to opt for the Extended Stable schedule since the four-week cadence is going to be the default, Microsoft has said.

Also, Edge is not the only Chromium-based browser that’s moving to a four-week release cycle. Brave plans to match this new schedule as well.