Microsoft wants its users to switch to using Bing as their default search engine. 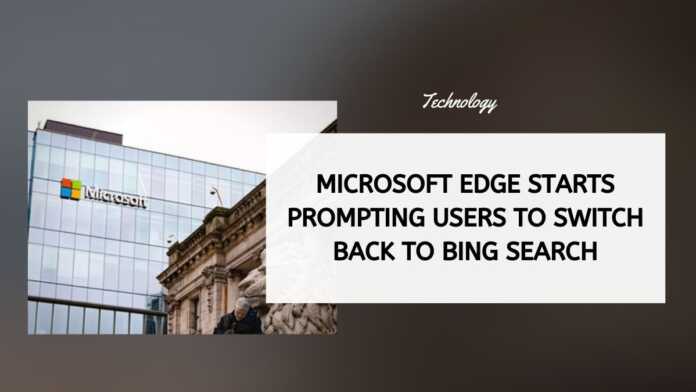 Microsoft has been busy adding features ever since it moved to Google’s Chromium browser engine last year. The latest change to the browser has now begun asking users to switch back to Bing as the browser’s default search engine.

Almost everyone uses Google for searching the web, and many users who download browsers other than Chrome tend to change their default search engine to Google. However, Microsoft Edge has now started asking users on version 91 asking users to switch back to the recommended browser setting.

According to XDA, which spotted the message along with users on the Microsoft Edge and Windows 10 subreddits, some thought it was a bug that caused the message to be displayed. However, the report states that a redditor who claims to be a Windows Insider MVP explains the real reason why users are seeing this message.

The message prompts users to “use Microsoft recommended browser settings” which will reset the primary search engine to Bing, but they also have the option to select “don’t update your browser settings”. According to Redditor u/froggypwns, the reason Edge is asking users to switch back to Bing is to save users whose browser has been infected by malware, the report states.

However, even though it is true that many users inadvertently install malware on their computers that can result in their search engine changing to an ad-filled, popup infested website, it seems like Microsoft could have introduced a system to ask users if they wanted to switch back to a list of preloaded browser search engines such as Google, DuckDuckGo, Bing, Qwant and more.

The prompt to switch back to only one option may also be the browser’s way of trying to convince more users to switch to its engine.