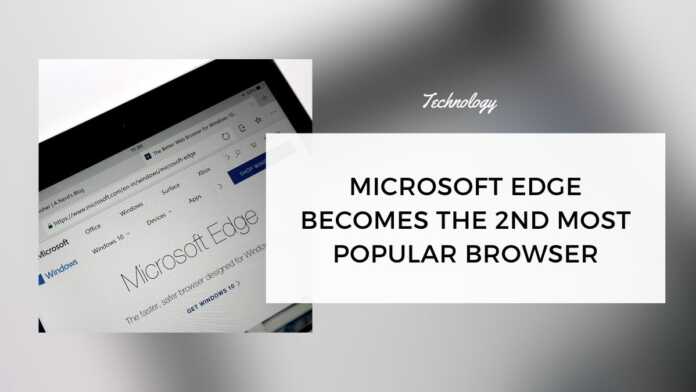 Microsoft’s efforts to get back in the browser have worked with Edge becoming the 2nd most popular globally. Microsoft Edge has managed to beat Mozilla Firefox, according to NetMarketShare’s March report.

Microsoft Edge now has a 7.59% share in the desktop browser segment. Firefox has taken the third position with 7.19% followed by Internet Explorer with 5.87% market share. Google Chrome still leads with a mammoth 68.5% market share overall.

Edge browser’s competition will most likely be with Firefox considering Chrome is practically untouchable right now.

This is still a considerable achievement for Microsoft Edge which recently moved to Google’s Chromium open-source engine making it more accessible to non-Windows devices.

Microsoft’s decision was however not taken well by rival Mozilla who said that this would only contribute to Google’s monopoly on the internet.

Microsoft earlier this week announced new features for Edge starting with a new ‘Collections’ section for users to organize information from various sources.

Edge will also soon get vertical tabs. Microsoft is also introducing ‘Smart Copy’ on Edge to store content in a rich web format.

For privacy, Edge will get a tracking prevention feature to block third-party trackers on websites. Microsoft also announced support for Netflix 4K content on Edge along with Dolby Audio and Dolby Vision. This is however only for Windows 10.

One major update coming to Edge is Microsoft Editor which like Grammarly will offer suggestions for better sentences, vocabulary and even formal languages.