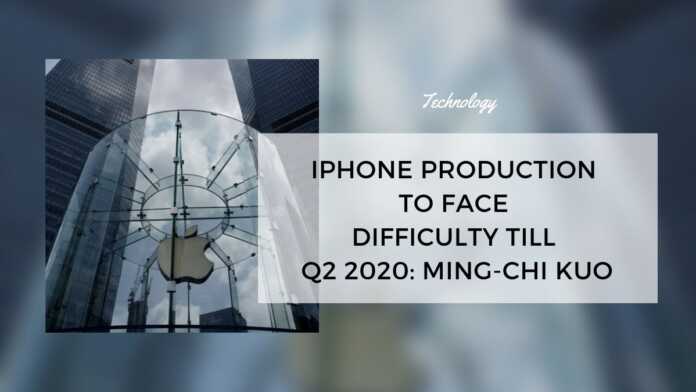 The coronavirus outbreak is set to have a huge financial impact on most smartphone companies. Apple will be no exception. While the company has officially warned of lowered revenues, analyst Ming-Chi Kuo says the iPhone production will not improve until the second quarter of 2020.

It’s worth noting that Apple’s manufacturing and component suppliers are facing keeping up with the production since the outbreak of coronavirus in China last month.

For instance, supplier Genius Electronic Optical has reduced phone camera lens shipments. Kuo claims the supplier has just a month’s worth of lens inventory left. He, however, said things will start to get back on track starting May.

Kuo also sheds light on some of the key features expected from the iPhone 11. According to the analyst, Apple’s 2020 lineup, aka iPhone 12, will come with an ultra-wide lens design as seen on the iPhone 11 series.

Earlier, Kuo had said Apple’s 2020 lineup will feature 5G connectivity. On rumors of iPhone SE 2 aka iPhone 9 launch getting delayed, he said the phone will launch in the first half of 2020 despite the outbreak of COVID-19.

Kuo’s comments come shortly after Apple hinted that it might not meet its sales target due to the lost production and supply issues and weakening demand in China from the coronavirus scare.

“The health and well-being of every person who helps make these products possible is our paramount priority,” Apple Chief Executive Tim Cook said in a statement released by Apple. It will reopen China stores “as steadily and safely as we can,” the company added.

Rival Samsung is also bearing the brunt of the outbreak. According to a recent report, Samsung saw significantly lower demand for Galaxy S20 in South Korea, one of the top affected nations by the coronavirus outbreak.