Apple began adding support for AirTags and other tracking accessories with iOS 14.3. 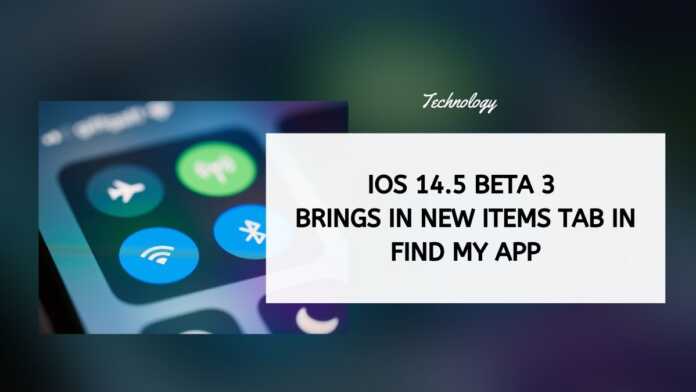 Apple has released the third iOS 14.5 beta to developers now following two other beta releases that brought in a bunch of changes to the iPhone and the iPad.

The latest beta release, besides bringing in the option of choosing a third-party music player as default, has enabled a new “Items” tab in the Find My app. This allows users to track the upcoming AirTags and other third-party accessories.

As per 9to5Mac’s November report, Apple began adding support for AirTags and other tracking accessories with iOS 14.3. This information was based on an internal code found in the system. Users then discovered that there was a way to enable the new ‘Items’ tab in the Find My app that was hidden till now.

With iOS 14.5 beta 3, the new ‘Items’ tab comes enabled by default in the Find My app. This hints towards the fact that Apple is closing in on launching its Find My network to allow users to track objects by using smart tags, including the in-house AirTags that are expected to launch this month. This change was spotted by @IceCoolTech and shared on Twitter.

Was this in beta 2? pic.twitter.com/EdgkKrWc4U

When you open the Find My for the first time in iOS 14.5, you will now be able to see a new welcome screen that shows what’s new in the app.

This includes support for tracking accessories, improved notifications, and the Find My network. When you tap on the ‘Items’ tab, you will be able to add a new accessory to the app or identify a ‘found’ item that does not belong to you.

Apple’s much-awaited AirTags are expected to launch this month, so these new tweaks make sense.