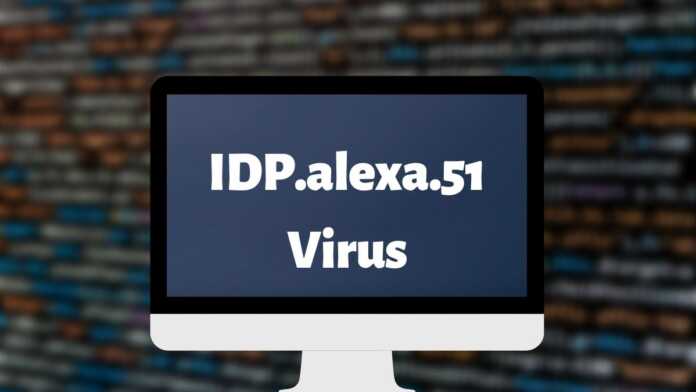 IDP.alexa.51 detection is primarily associated with online games such as “SeaMonkey”, “Plants vs. Zombies” and others. The detected object is reported to originate from .tmp and .exe files located in various Windows folders, such as the %appdata% and %temp%.

Despite the false-positive reports by researchers, if your antivirus software is telling you that you have the IDP.alexa.51 virus, don’t take the warning lightly.

While this is known to sometimes be a false positive detection gamers, in particular, are seeing this malware that’s causing slowed systems and even repeated crashes, along with other odd behaviors including browser hijacking and misuse of system resources.

What Is the IDP.alexa.51 Virus?

While IDP.alexa.51 used to be classified as a simple false positive warning generated by antivirus software, there is continuing information that indicates it is indeed quite a malicious program similar to a Trojan that can cause quite a lot of damage to a computer.

A malicious program like a Trojan is specifically designed to enter your computer to destroy or take control of your system. Some Trojans can also house spyware, which is designed to steal your personal information and send it to hackers.

According to the analysis being held a year ago, the IDP.ALEXA.51 malicious detection prevails on the systems running 8.1 located in Portugal and Brazil. However, the extent of this erroneous detection did not decrease and is currently often found on Windows 10 systems running Avira and AVG.

How Does the IDP.alexa.51 Virus Work?

Some call it a Trojan as it acts in a similar way to known Trojans that perform very specific and malicious tasks on infected systems. However, it can also act as spyware and send personal information from your computer to hackers who use it for nefarious reasons.

The IDP.alexa.51 virus is a threat that should be taken seriously, even if you might think your antivirus software might be giving you a false positive result during scans.

Reports have arisen on AVG support forums that the antivirus software is displaying a false positive, and they haven’t noticed anything out of the ordinary with their systems.

However, Spyware is specifically created to act stealthily in the background and avoid detection. Still, most people notice the following types of issues with their computers:

You might also see a suspicious detection message that is displayed when the system starts or restarts. Then, two different executable files are detected with the following names:

If malware, the software may have arrived in the form of an unwanted download. This may be due to a malicious download, a direct download because of a redirect, an online message, clicking on a malicious link, or a dangerous email attachment in a spam message.

How Do I Get Rid of This Virus?

Detecting and removing Trojan horses could require a bit more attention and system knowledge. To successfully delete this nasty infection from your machine you have to install a strong antivirus software program.

A good antivirus can remove the IDP.alexa.51 virus although it can take several hours to do so. There are other options to try as well.