Yu confirmed that the Huawei P40 series smartphones will be launched at a special event in Paris, France. 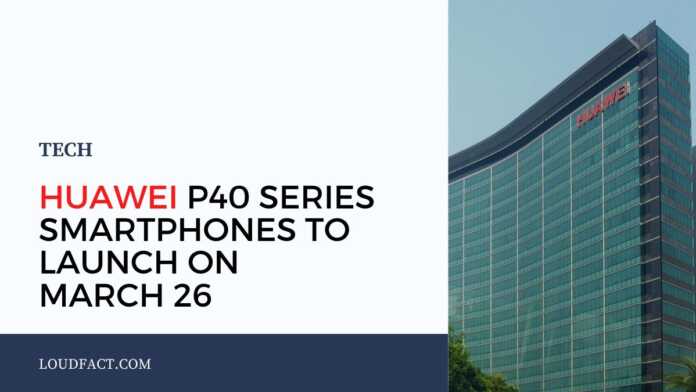 Huawei earlier this week launched its second-generation foldable-display smartphone, that is, the Huawei Mate Xs, along with the MatePad Pro 5G and a bunch of new MateBook series of laptops.

Yu confirmed that the Huawei P40 series smartphones will be launched on March 26 at a special event in Paris, France.

As far as the Huawei P40 series smartphones are concerned, reports in the past have already detailed as to what we can expect from the company’s upcoming smartphones.

The Huawei P40 Lite, on the other hand, is likely to come with a 6.4-inch LCD display with a resolution of 1080×2310 pixels. It is expected to be powered by Kirin 810 processor that coupled with up to 8GB of RAM and up to 128GB storage space.

It is expected to feature a 16-megapixel camera on the front and be backed by a 4,200mAh battery with 40W fast charging support.

Similarly, the Huawei P40 Pro is likely to come with a 6.5-inch to 6.7-inch notch-less display with five cameras at the back consisting of a wide-angle sensor, a cine sensor, a ToF (Time of Flight) sensor, a periscope lens, and either a telephoto lens with up to 9x optical zoom or an ultra-wide lens.

Huawei is also likely to launch the P40 Premium Edition smartphone, which is likely to come with five cameras at the back.

All the P40 series smartphones are expected to run on the company’s HarmonyOS operating system instead of Google’s Android mobile OS.