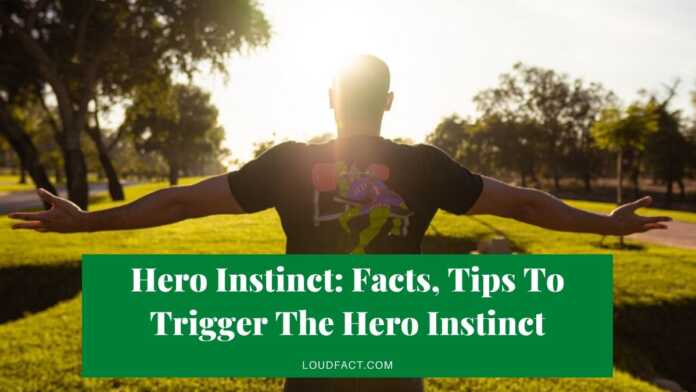 Hero instinct is something all men have buried down in their hearts. It is something that affects men on a day to day basis and it is the deepest desire for meaning and purpose.

The hero instinct is one of the quite controversial topics, it has been debated a lot online, some people may believe about its existence, and some may not.

Here are some of the facts about man’s hero instinct which you can use as one of the strategies to make your man fall for you.

What Is A Man’s Hero Instinct?

A hero is defined as someone that we are admired for bravely doing something or achieve something great.

It’s interesting enough to watch heroes spring into action, take risks, overcome the obstacle, protect their women, and place themselves in danger just to save the world. But in reality, you literally can have your own hero by triggering a man’s hero instinct in your man.

All Men like to be heroes in women’s eyes. It’s about satisfaction, a men desire to feel important. They want to show how useful, strong, and effective he is among his peers.

This theory also applies to relationships and women should appeal to man’s hero instinct in order to keep peace and respect in a relationship.

How To Trigger The Hero Instinct?

Asking a man for help makes him love you and fall for you. Remember a better way to trigger a man’s hero instinct doesn’t involve faking or staging an incident.

However, you can ask him to help you in ways you know he will succeed. This may include hobbies or skills that he already enjoys having. Ask him for his expertise and he will never fail.

Further thank him warmly, with a great big smile of appreciation.

Praise him even for his small success. Most men miss the appreciation for what they do and some men feel taken for granted for this.

Remember, they don’t want to be worshipped, they just want to feel appreciated for the effort they put forth. Look him in the eye and say thanks the next time he does something nice. This will help in triggering the hero instinct and love for you.

3. Make Him Feel That You’re Happier With His Efforts

Most men can feel whether you are happy with him or not. So the best way to show him you’re truthful with his efforts to please you is to actually look happy, to be ebullient and to project happiness and enthusiasm.

He will definitely notice how happy you get after he does what you want him to do. Now he has positive associations and this will trigger his hero instinct.

4. Encourage Him To Do What He Loves

Everyone has a dream. This also applies to him, he too has dreams of doing something he loves and succeeding in life. For this, you have to always encourage him to follow his heart and do what makes him happy. Support him in his personal ambitions. Let him know that you’re always with him and his number one fan.

5. Support Him In Public

It is one of the best ways to flatter a man and trigger the hero instinct in him. Additionally, this boosts both his ego. You don’t need to be showy, just keep things genuine.

Don’t be afraid to thank him in public for something he did for you. Try to make it look as if you’re just oblivious to the people around you and that you want to compliment him because it genuinely makes you happy.

6. Let Him Feel Your Respect Him

All men want to earn respect from whom they love and they crave for it more than a woman’s love. So give him opportunities to prove himself. You don’t have to do the work of winning him over. Sit back, relax, and allow him the pleasure of winning your admiration.

There are a few women who can satisfy this emotional need in men and this makes them impossible to resist the hero instinct. Satisfy a man’s hidden, emotional need in a way that will captivate his heart so that he’ll go to the ends of the earth to please you.

The key to unlocking your man’s hero instinct is not about faking your reactions. It should be real. When he does something for you, look at him and make him realize that you have genuine respect for him. Believe me, when you know the secret of man’s hero instinct, you will be shocked by the result of the man you love.

If his hero instinct is not being met, his attention will roam around until he finds a woman who can give it to him. Maybe only one from a thousand women who are known to do this instinctively. And they usually rise to unbelievable levels of influence and fame.