GoPro Hero 10 Black is tipped to come with a new GP2 processor, which is said to bring a significant boost in performance. 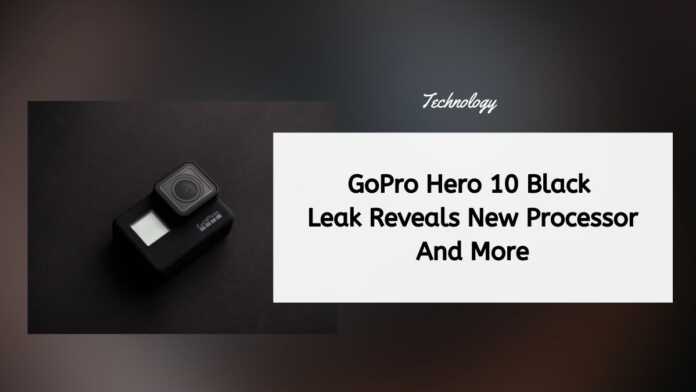 GoPro seems to be prepping to launch its next-generation Hero action camera. As per the leaks, the GoPro Hero 10 isn’t getting a major design overhaul. However, that isn’t stopping the company from offering new features. The upcoming device is rumored to bring a lot to the table.

The latest development comes from a WinFuture report that has revealed the major upgrades coming to the Hero 10 Black. As per the leaked images, Hero 10 looks similar to Hero 9.

It might be the same size, retain the front display and offer the same looks. However, we can notice a change in the color scheme. The GoPro logo is now colored in the company’s blue color. That being said, most of the major changes lie inside the camera.

As per the report, the upcoming GoPro Hero 10 Black is tipped to come with a new GP2 processor, which is said to bring a significant boost in performance that will support refresh rates.

The new device is likely to have support for a 5.3K video recording at 60fps, 4K recording at 120fps, and 2.7K recording at 240fps. Moreover, it is getting a sensor upgrade too. The report states that the upcoming GoPro camera will offer a maximum photo resolution of 23MP, as compared to 20MP on the Hero 9 Black.

The GoPro Hero 10 Black is said to come with HyperSmooth 4.0 to offer “gimbal-like stabilization.” The action camera is touted to also support automatic upload, offering another way to upload new videos to the internet alongside the existing 1080p live streaming.

Other features include 10 meters of water resistance, TimeWarp 3.0, support for RAW photos, SuperPhoto, HDR, etc. There is no word on the pricing and availability at the moment.