Google Weather App Rolled Out Again After Being Hit By Bug 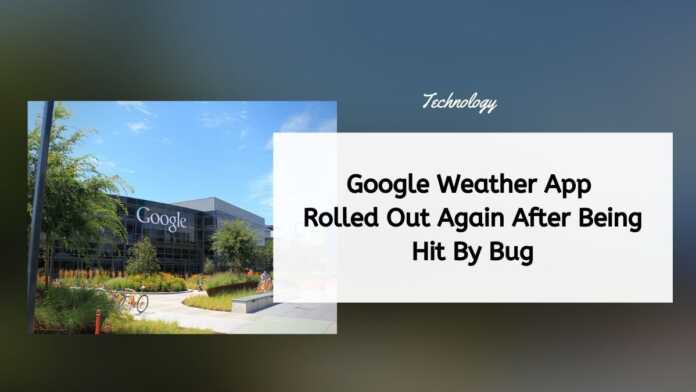 Google has resumed the rollout of its Weather app to users after putting it through a design makeover. Google Weather app is being rolled out two months after it was paused in what was one of the biggest changes the company has made to its weather app in years.

The decision to roll out the redesigned app comes ahead of Google’s launch of its Android operating system that is expected to arrive later this year, along with a new Weather app widget. Those who want, can now try and carry out a Google Weather app download if they would like to check out what is new.

Back in May, Google had rolled out its Weather app promising a new experience to users. The Google Weather app search bar was revamped, a special Material theme element was included that had more rounded corners for elements on the screen.

One of the bigger changes to the weather app was Google knocking off the navigation drawer entirely, instead of moving these options to the profile photo icon. This isn’t the first app to see the switch away from the navigation drawer – the most notable example of this change was made to the Google Play Store.

A week after the company introduced this new redesign Google Weather app in May, the company abruptly halted the rollout and many found their user interface had reverted to the old design.

Further, it appears that the company is rolling out the new redesign, according to a report by 9to5Google. The weather section also reportedly had one visual glitch that would show users a white status bar when the design was rolled out initially – this appears to have been fixed in this rollout.

According to the report, users should now see the status bar display the right color based on the weather instead of the previous (buggy) white bar.