Google currently has a presence in 26 states across the US and all the investments made this year will be focused on 11 of those. 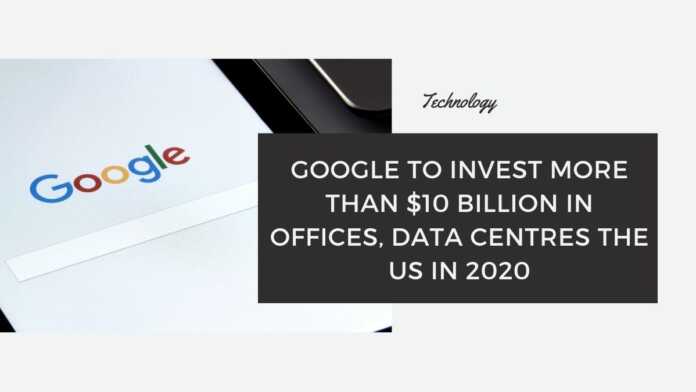 Google and Alphabet CEO Sundar Pichai announced in a blog post today that the company is going to invest more than $10 billion in offices and data centers across the US this year.

Google currently has a presence in 26 states across the US and all the investments made this year will be focused on 11 of those. Namely – Colorado, Georgia, Massachusetts, Nebraska, New York, Oklahoma, Ohio, Pennsylvania, Texas, Washington, and California.

Today I’m pleased to announce that Google will invest more than $10 billion in offices and data centers across the U.S in 2020, creating more opportunities in communities from Massachusetts to Texas. https://t.co/zyW4a8l52Z

“Everywhere we invest, we strive to create meaningful opportunities for local communities,” Pichai wrote in the blog giving the example of the data center in Pryor, Oklahoma.

When Pichai went to Pryor last year to announced a $600 million investment, their fourth expansion there since 2007, the mayor told the crowd that Google’s investments had helped provide local schools with the resources they needed, including the latest textbooks and STEM courses.

Pryor mayor Larry Lees also thanked Google for the small businesses they helped train and the mentorships for Pryor students.

Pichai wrote that this was exactly the kind of difference they, as a company, hoped to make with the new offices and data centers that will come up in 2020.

“This effort builds on the momentum of the $13 billion investment in communities from South Carolina to Nevada we made in 2019,” Pichai added.

This $13 billion investment made last year along with other R&D investments made Alphabet (Google’s parent company) the largest investor in the US last year.

In the blog, Pichai went on to elaborate plans Google had for West, East, Central, Mid-West and South regions of the US.

“In addition to these investments in infrastructure and jobs, we’ll also continue our work nationally with local startups, entrepreneurs and small business owners to help Americans access new digital opportunities. Already Grow with Google and Google for Startups have trained more than 4 million Americans in hundreds of communities across all 50 states,” Pichai added.

“Looking ahead, we’re especially excited about our work creating pathways to jobs in the fast-growing field of IT through our two Grow with Google certificate programs,” Pichai wrote.