Google To Drop Active Edge Feature In Pixel 4a 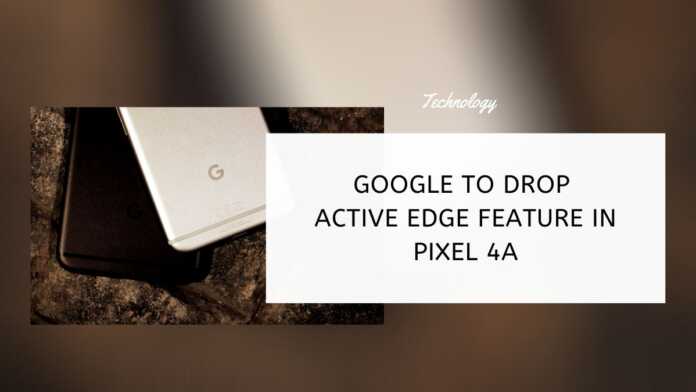 Google’s budget smartphone, Pixel 4a, has been in the news for quite some time now. Reports in the past have not only detailed the expected price and specification of the upcoming smartphone but also given us a glimpse of how efficiently the phone’s camera would work.

Now, a new report says that the Pixel 4a will be missing a key feature that has been a standard on Pixel smartphones since the launch of the Google Pixel 2.

Multiple sources have confirmed that Google is planning to drop the Active Edge feature in its Pixel 4a smartphone.

To you a brief about the feature: Google first introduced Active Edge in its second-generation Pixel 2 and Pixel 2 XL smartphones. The feature allowed users to invoke Google Assistant by squeezing the sides of the phone. HTC offered a similar feature in its phones before it was acquired by Google back in 2017

Coming back to Pixel 4a, both XDA Developers’ Mishaal Rahman and 9To5 Google’s Stephen Hall have said the Active Edge will be missing from Google’s upcoming smartphone and that Pixel 4a will be first in the Pixel lineup to drop this feature.

Can confirm that Active Edge is not available on @julio_lusson‘s Pixel 4a.

Separately, reports hint that the phone was scheduled to launch in Germany on May 22. However, the launch has now been postponed till June 5.

Reports also hint that the Pixel 4a will come with a 5.81-inch display and that it will be powered by the Qualcomm Snapdragon 730 that will be coupled with 6GB of RAM and 64GB of storage space. The phone is expected to get a 12-megapixel camera at the back and a 3,080mAh battery.