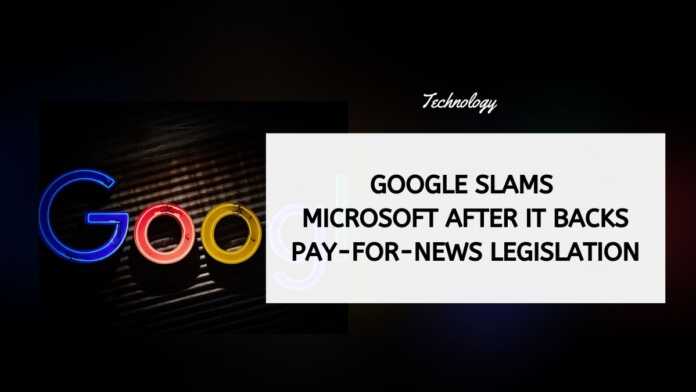 Google slammed rival Microsoft in a blog post, accusing it of “reverting to its familiar playbook of attacking rivals” and “lobbying for regulations that benefit their own interests” after the latter has backed legislation that seeks to make big tech companies like Google and Facebook pay news publishers to feature content on their platforms.

In a blog post, Global Affairs senior vice president Kent Walker wrote that Microsoft was attempting to “undercut” Google and was “even willing to break the way the open web works in an effort to undercut a rival.” Last month, Microsoft president Brad Smith wrote a blog post seeking a replication of Australia’s News Media Bargaining code.

Walker said it was “no coincidence” that Microsoft’s interest in attacking the company came soon after the Solarwinds attack, which has left several companies reeling across the world “at a moment when they’ve allowed tens of thousands of their customers — including government agencies in the U.S., NATO allies, banks, nonprofits, telecommunications providers, public utilities, police, fire and rescue units, hospitals and, presumably, news organizations — to be actively hacked via major Microsoft vulnerabilities,” he said.

He also alleged that the company was warned about the flaws in its systems and was aware they were being exploited. “(They) are now doing damage control while their customers scramble to pick up the pieces from what has been dubbed the Great Email Robbery,” he wrote in the blog post. Smith was scheduled to testify at the United States House of Representatives antitrust subcommittee hearing on the same topic.

Alleging that Microsoft had paid out a “much smaller amount to the news industry” than Google, Walker said that the company had replaced their own journalists with AI bots instead of supporting them. He added that Google would continue to work with news organizations and policymakers to strengthening journalism, despite Microsoft’s “attempts at distraction”.

Microsoft later published the transcript of Smith’s written testimony before the House Committee on the Judiciary, Subcommittee on Antitrust, Commercial, and Administrative Law. “When technology undermines the health of the free press – as it has – then we must pursue new solutions to restore the healthy journalism on which our democracy depends,” Smith stated.

Stating that referral traffic was valuable, news organizations found it difficult to monetize that traffic because “most of the profit has been squeezed out by Google’ which ended up turning into the “front page” for news and ”owning the reader relationship and relegating news content on their properties to a commodity input,” Smith said in his testimony before the House.

You can read the rest of Smith’s testimony, as well as his recommendations for what remedial action must be taken, on Microsoft’s On The Issues Blog.