Two employees named Laurence Berland and Kathryn Spiers, who were fired back in 2019 in connection with employee activism, were being spied on. 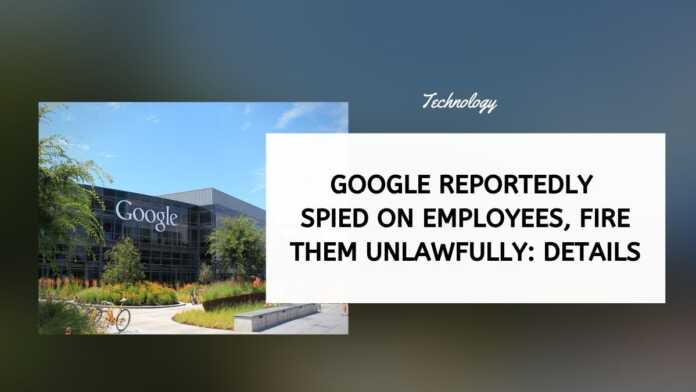 Google seems to have landed itself in a bit of trouble this time and as per a complaint filed by the National Labor Relations Board (NLRB), has been accused of spying on its employees.

As per the complaint, two employees named Laurence Berland and Kathryn Spiers, who were fired back in 2019 in connection with employee activism, were being spied on by Google.

As reported by multiple publications, Berland was working with IRI Consultants, a firm known for its anti-union efforts, against Google. He was let go when Google found out that he was reviewing other employees’ calendars.

Now, as per NLRB, Google’s policy against the workers looking at others’ calendars is unlawful. Although several employers were fired for the protest, NLRB found the termination of Berland and Spiers as a violation of labor laws.

“Google’s hiring of IRI is an unambiguous declaration that management will no longer tolerate worker organizing,” Berland said in a statement. “Management and their union-busting cronies wanted to send that message, and the NLRB is now sending their own message: worker organizing is protected by law.”

Spiers, on the other hand, was fired for creating a pop-up for Google employees that led them to the IRI Consultants website. As mentioned by The Guardian, the notification read, “Googlers have the right to participate in protected concerted activities.” In defense, Google said that Spiers violated security policies. NLRB also finds this firing as unlawful.

“Colleagues and strangers believe I abused my role because of lies told by Google management while they were retaliating against me. The NLRB can order Google to reinstate me, but it cannot reverse the harm done to my credibility,” said Spiers.

In case Google chooses to fight against NLRB, the complaint will go to an administrative judge in the coming months, as per The New York Times. And if Google loses the cases, it may have to pay the wages to both employees and rehire them.