In the letter titled “Open letter to Australians”, Google broadly gives three reasons why and how the News Media Bargaining Code will hurt Australians use Google Search and YouTube. 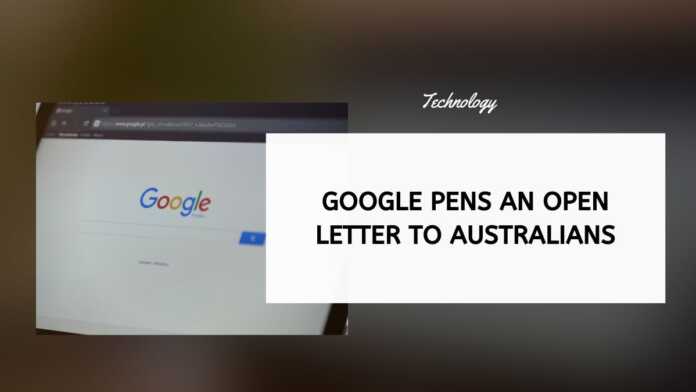 The Australian government, over the past couple of months, has been working on a code of conduct that will force Google and Facebook to pay publishers in Australia for their content that appears in News and in Search.

The two tech companies have openly spoken against the proposal that is open for consultation until August 28. Now, Google has shared an open letter with its users in Australia warning them against the proposed law.

In the letter titled “Open letter to Australians”, Google broadly gives three reasons why and how the News Media Bargaining Code will hurt Australians use Google Search and YouTube.

Google says that if the law indeed comes into effect it would put every day searches on Google at risk. “The law would force us to give an unfair advantage to one group of businesses – news media businesses – over everyone else who has a website, YouTube channel or small business. News media businesses alone would be given information that would help them artificially inflate their ranking over everyone else, even when someone else provides a better result,” Google Australia MD Mel Silva wrote in the open letter.

Silva also explained that besides giving an unfair advantage, the new regulation may put users’ data at risk. “Under this law, Google has to tell news media businesses “how they can gain access” to data about your use of our products.

There’s no way of knowing if any data handed over would be protected, or how it might be used by news media businesses,” she added.

Lastly, Silva explained that the new law would also hurt the free services that users use by allowing big media organizations to make enormous and unreasonable demands that would put the company’s free services at risk.

“We’re going to do everything we possibly can to get this proposal changed so we can protect how to Search and YouTube work for you in Australia and continue to build constructive partnerships with news media businesses,” she added.