Google is pulling the plug on ‘uncertified’ devices whose integrity and security it can’t be sure of while rolling out RCS globally. 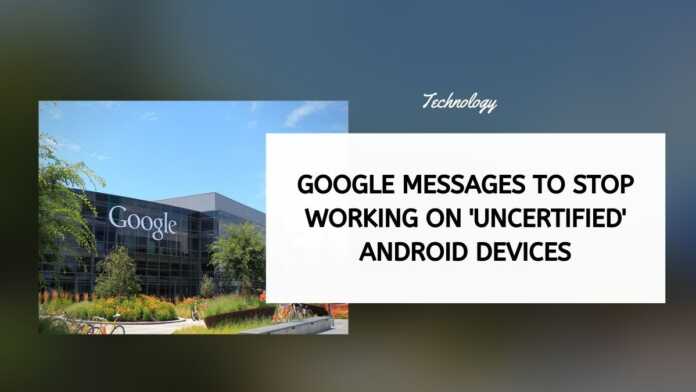 Android users who have replaced their manufacturer’s stock SMS application with Google’s Messages app may in for a surprise in a couple of months when the company is likely to pull the plug on devices that are not ‘certified’ by the company.

According to reports, the latest version 7.2.203 of the Google Messages app indicates that the app is likely to stop working on devices that are Google Play ‘certified’ – more simply, those devices that have not passed Google’s certification process or run modified versions of the software that shipped with their devices.

The upcoming update to Google Messages reportedly contains a string containing the text “On March 31, Messages will stop working on uncertified devices, including this one.” spotted by XDA during a recent APK teardown.

It is suspected that the move to disable support for uncertified devices is to pull the plug on devices whose integrity and security Google can’t be sure of, while it rolls out the RCS functionality into Samsung Messages and Google Messages over the course of this year.

Unfortunately, this is bad news for both users of Huawei’s devices that run Android without Google Play Services as well as users of other smartphone manufacturers in China and other regions that simply ship without Google services and allow users to enable Google features through hacky workarounds later.

Another unfortunate casualty of such a move would undoubtedly be users who have rooted or flashed custom ROMs to their devices, which certainly marks their phones are ‘Uncertified’ in the Play Store.

While workarounds like John Wu’s Magisk exist to ‘trick’ the device into reporting that it is certified, they are ultimately a cat-and-mouse game with Google and the reality is that Google’s messaging app will likely stop working for most of these users in the future.