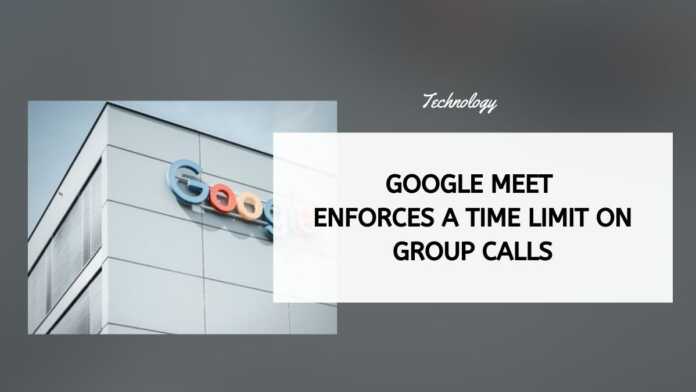 Get set for a bad experience, as Google does a U-turn. Google Meet users will now only be able to host a group video for only 60 minutes. Google has enforced a 60-minute time limit on calls for those who are using this service for free.

Last year, the search giant announced that it would not impose a time limit on video calls until September 2020. The company later extended this offer to June 2021 to give a tough competition to rival Zoom, Skype, and all other popular video conferencing platforms. However, the offer is no longer being extended.

The company announced that it will impose a cap on how long the calls can last. In effect, Google Meet free group calls time limit is no longer well, limitless, it has been cut drastically.

The company, via an update on its support page, has announced that free Google Meet users will be able to host only one-on-one calls for up to 24 hours via their personal computers. But this is not true for group calls.

The company said that calls with three or more participants can go a maximum of up to 60 minutes. It is worth noting that users with personal Google accounts can have a maximum of 100 participants in a video call.

“Tip: At 55 minutes, everyone gets a notification that the call is about to end. To extend the call, the host can upgrade their Google account. Otherwise, the call will end at 60 minutes,” Google wrote on its support page.

However, if you have an enterprise account, this limit will remain unchanged for you. The company said that Workspace users can host one-on-one calls and group calls with three or more participants for up to 24 hours without any change.

The upgrade mentioned by the company is the $9.99 per month for Workspace Individual tier that launched in five countries, which includes the US, Canada, Mexico, Brazil, and Japan. After upgrading to this plan, users will be able to host group calls running for up to 24 hours without any restrictions.