WhatsApp will be the second platform after Google Photos to stop offering unlimited storage space to its users. 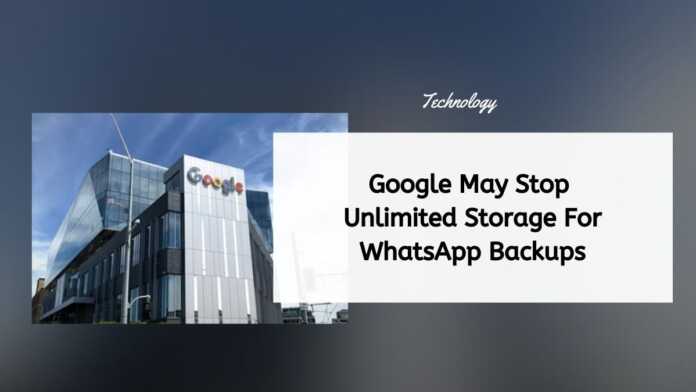 WhatsApp may soon end the unlimited chat backups facility in Google Drive and will allow you to manage the chat backup within a limited storage quota. A new report indicates that Google might soon start taking into account some of the storage space that WhatsApp users use for their chat backups.

According to a report by WABetaInfo, it is possible that Google may soon start counting the space occupied by WhatsApp backups on Google Drive at least partially.

The blog site reported that the tech giant might stop offering unlimited storage for WhatsApp backups. As a part of this change, the company will offer a limited plan – 2000 MB or 2GB per user – for WhatsApp users for their chat backups.

“This new plan has not been announced yet and everything may change in the next weeks, but this is the idea around the new way to store WhatsApp backups on Google Drive,” the blog site reported.

To solve this issue, WhatsApp reportedly is working on a feature called Manage Backup Size. This feature when released will give users the option to manage the size of their chat backups.

“WhatsApp is also working on a new section where the user can manage the backup size. Thanks to this section, the user can exclude specific media to be included in the next backup. The feature is under development and it will be available in a future update,” the blog site added.