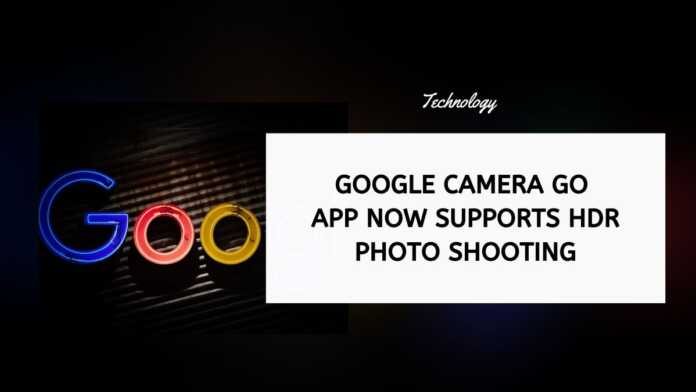 Google has added a new feature in its Camera Go application that will allow users to take HDR photos. “Camera Go keeps getting better. We’re bringing HDR to more #Android devices, allowing you to capture photos with crisper details and richer color at any time of day,” said Google in a tweet.

Low light, camera, action ?! With Night Mode on Camera Go, take high-quality photos on your Android phone, no matter what time of day it is. pic.twitter.com/UooQhAm9tF

In case you did not know, Camera Go is a stripped-down version of Google’s main camera application available on Pixel phones. Camera Go, just like other Go apps, is aimed at phones with low-end specifications, generally with lower storage and RAM capacity.

HDR is a common feature on modern cameras available on a budget, mid-range, and premium phones. The technology allows the device to deliver pictures with a greater range of luminosity than the basic camera.

Google’s tweet also shows a side-by-side comparison of photos with HDR on and off. The HDR-enabled image has better light captured.

While the feature works smoothly on budget and above phones, it will be interesting to see how it is implemented on low-end phones. The challenges could range from blurry images to the longer time taken for image processing.

Google’s Camera Go application is available for phones running Android Go Edition. Non-Android Go users can also try the stripped-down camera application but some elements such as Night Mode and HDR may not work, reports AndroidPolice.