Although Godaddy talked about awarding employees with extra cash, those who failed the test, were assigned extra work instead. 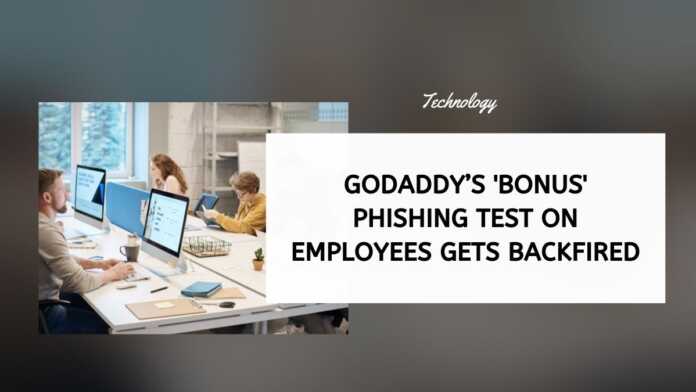 GoDaddy recently announced about holiday bonus, except that it was a deaf phishing test and got backfired on social media. Although it seemed about awarding employees with extra cash, those who failed the test, were assigned extra work instead.

GoDaddy promised $650 holiday bonus in the mail sent to employees and many of them thought it was an act of corporate goodwill. According to Copper Courier, this happened with some 500 employees at GoDaddy.

The email stated that it will give one-time payouts to “show our appreciation” for “a record year for GoDaddy.” It also asked employees to reply, giving their details on location and other information in order to receive payments.

However, those who gave their information got a mail after a couple of days stating that they failed the phishing test. It also mentioned that they would be required to complete security training.

This news, however, reached social media and got outraged by many users, threatening to change hosting providers.

It often happens that companies send fake phishing emails to test employers. However, considering the pandemic scenario, health issues, and millions who are struggling to stay fed and are unemployed, this email didn’t really prove what it was intended to.

It has also been pointed out that GoDaddy laid off or reassigned hundreds of employees during the pandemic. However, this was despite reporting record growth in new customers in the last earnings call.

GoDaddy, however, soon apologized for to its employees and customers. In a statement, the spokesperson said “GoDaddy takes the security of our platform extremely seriously. We understand some employees were upset by the phishing attempt and felt it was insensitive, for which we have apologized. While the test mimicked real attempts in play today, we need to do better and be more sensitive to our employees.”