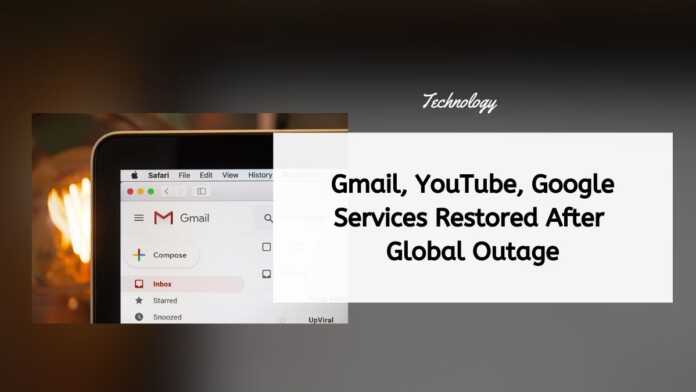 Google suffered global outage after its various sites were reported as being down in the United Kingdom. Reports on Downdetector showed that a major event had occurred at Gmail with thousands reporting problems.

Reports about YouTube being down too were received but these numbered in the hundreds, unlike Gmail. Reports received by Downdetector about Gmail exceeded 2600 while YouTube reports were measured at 349.

Downdetector says that it reports an ‘incident’ when glitch reports about any site on its portal exceeds the typical volume for that time of day. The problem faced by Gmail was not just on the website but also on the app.

Among the reports received regarding YouTube, as many as 49 percent said they are facing issues on the website, 38 percent were facing an issue with the app and 13 percent faced glitches with video streaming.

However, the sites are all back now. The Downdetector message now reads, “User reports indicate no current problems at Youtube.” In its reaction to Express of UK, Google said, “On Friday November 12 around 08:30 am UTC, some of our users experienced a service disruption to Google Cloud services, including Google Workspace. This issue is now resolved.”

As is clear from the Google Workspace Status Report, the problem was quite widespread with Google Chat, Google Meet, Google Calendar, and Google Groups being affected too. Check the report here.

Google is not the only one suffering glitches. Facebook owned companies suffered a major outage recently that lasted over 5 hours.

The outage was global and it affected WhatsApp, Facebook, Instagram, Facebook Messenger and more. After services were restored, CEO Mark Zuckerberg had apologized for the inconvenience caused to users.