Last month Apple CEO Tim Cook said that the Coronavirus outbreak may have an impact on the company operations. 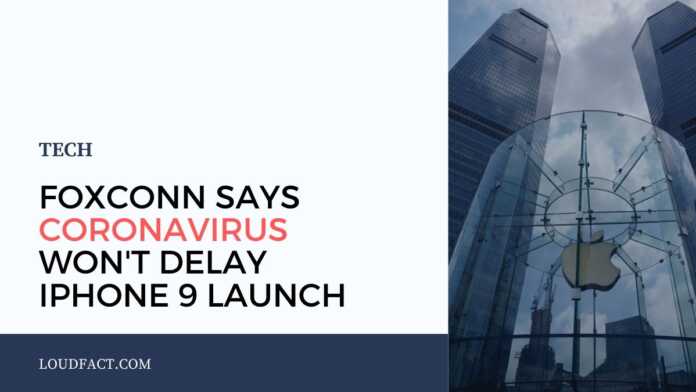 Apple’s manufacturing partner Foxconn has reportedly said that Coronavirus outbreak will have no impact on iPhone 9. The company has said that it has a “backup plan” and measures in place to ensure the production is uninterrupted, reports Gizchina.

It is worth noting that Apple is planning to launch an iPhone SE successor next month. Dubbed as iPhone 9 aka iPhone SE 2, the phone has already entered trial production.

“Apple has finally started trial production of the highly anticipated iPhone 9. This process will be used to iron out any issues and ensure assembly lines are running smoothly,” PhoneArena reported quoting MyDrivers on Friday.

Last month, Apple CEO Tim Cook during the company’s earnings call had confirmed China’s Coronavirus outbreak may have an impact on its operations. Apple and many other smartphone companies have their manufacturing hubs in China.

As far as the iPhone SE successor goes, the upcoming phone is going to come with iPhone 8 like form factor but with some newer features under the hood.

According to rumors, it’s going to come with 3GB RAM, 64GB/128GB storage, and Apple A13 processor. The phone is also said to come with a 4.7″ display and thicker bezels. The iPhone 9 could also mark the comeback of the Touch ID/ Home button on iPhones.

It will be aimed at the entry-level affordable flagship segment where Apple’s iPhone XR and iPhone 11 have done well commercially. Krish Sankar, a noted analyst at Cowen, claimed iPhone SE 2 aka iPhone 9 will cost roughly $475. He added that the new affordable iPhone may contribute to 12% of iPhone production in the second quarter of the year.

“Warm reception for the iPhone 11 & bullish investor sentiment on the smartphone market has led to expectations for iPhone unit Y/Y growth in CY20 especially with the SE2 (despite some cannibalization) and 5G product cycles,” Sankar is quoted as saying.