Foxconn got the green light to restart production in the eastern central Chinese city of Zhengzhou. 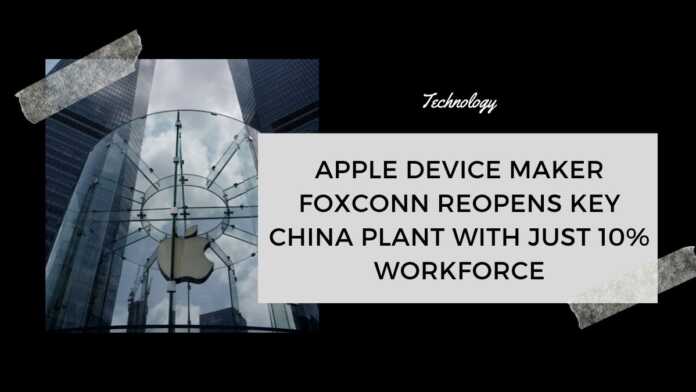 Apple supplier Foxconn got approval to resume production at a key China plant after being forced to shut it following a coronavirus outbreak, but only 10% of the factory’s workforce has managed to return so far, a source told Reuters.

The company, however, has not yet been allowed to restart production in Shenzhen, a southern manufacturing hub, the source said.

The two factories together make up the bulk of Foxconn’s assembly lines for Apple’s iPhones, and the delays are likely to impact global shipments.

Market research firm Trendforce on Monday cut its March-quarter forecast for iPhone production by about 10% to 41 million handsets.

Apple itself gave a wider-than-usual revenue outlook range for the March quarter last month to factor in uncertainty due to the virus that has claimed more than 900 lives and infected over 40,000 people.

An Apple spokeswoman in Shanghai was not immediately available for comment.

About 16,000 people, or under 10% of Foxconn’s workforce in Zhengzhou have returned to the plant, the source said, adding that company executives were trying very hard to negotiate with authorities to resume production in other parts of China, including Kunshan, in southeastern Jiangsu province.

Shenzhen authorities will conduct checks at the plant again later this week, the person said.

Employees in Shenzhen were told not to return to work on Tuesday, according to an internal memo seen by Reuters.

Foxconn, formally Hon Hai Precision Industry Co Ltd, said in a statement that employee safety was top priority and that it is working with authorities to meet requirements to resume production across China “in a staggered and orderly manner”.

Foxconn shares fell as much as 2.4% in Monday trade, lagging a 0.3% decline in the broader market. They have fallen more than 11% since the market reopened following the Lunar New Year break.