Foxconn Expects Normal Production To Resume By End of March

Foxconn shares have dropped more than 10% so far this year. 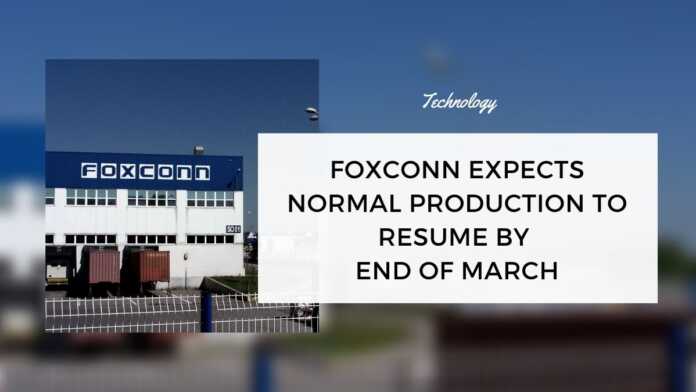 Apple supplier Foxconn said it would resume normal production in China by the end of the month and that more than half its seasonal workforce in the country had restarted work following the coronavirus outbreak.

The Taiwanese firm, which assembles Apple’s iPhones, however, said it was unable to predict the virus’s actual impact on its full-year results.

“Prevention of the outbreak, resumption of work and production are our top priority,” Chairman Liu Young-Way told an online investor conference on Tuesday.

The virus, which originated in China late last year and can be transmitted from person to person, has spread to more than 60 countries.

Foxconn is among manufacturers worldwide who are grappling with virus-related curbs that have upended supply chains and hurt demand.

This week, Hyundai Motor reported its worst monthly sales in a decade after earlier highlighting problems in parts supply from China.

Apple, Foxconn’s top client, rescinded its March quarter sales guidance due to a slower-than-expected ramp-up of manufacturing sites in China amid travel restrictions and an extended Lunar New Year break.

But on Tuesday, Young sought to reassure investors and said there were no big problems with the supply chain and that Foxconn was helping suppliers resume work.

Foxconn, the world No. 1 contract manufacturer, said late last month that it had started cautiously restarting production at its main plants in China but that the epidemic would take a toll on its revenue for the year.

The warning from Foxconn formally called Hon Hai Precision Industry Co Ltd, is likely to cloud Apple’s timeline for new phones. Foxconn tends to handle the introduction of new iPhones as its capabilities are the most advanced, supply chain experts say, but the timeline is under threat given the travel curbs.