Facebook To Create 10,000 Jobs In EU For ‘Metaverse’ Vision

Metaverse is a virtual space where multiple people can exist and communicate using virtual and augmented reality. 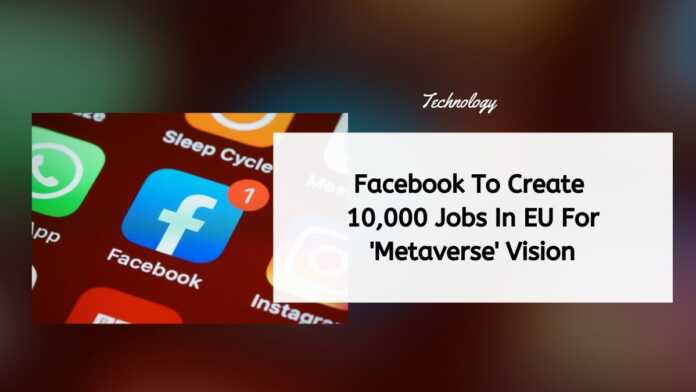 Facebook said it plans to hire 10,000 workers in the European Union over the next five years to work on a new computing platform that promises to connect people virtually but could raise concerns about privacy and the social platform gaining more control over people’s online lives.

The company said in a blog post Sunday that those high-skilled workers will help build “the metaverse,” a futuristic notion for connecting online that uses augmented and virtual reality.

Facebook executives have been touting the metaverse as the next big thing after the mobile internet as they also contend with other matters such as antitrust crackdowns, the testimony of a whistleblowing former employee and concerns about how the company handles vaccine-related and political misinformation on its platform.

In a separate blog post, the company defended its approach to combating hate speech, in response to a Wall Street Journal article that examined the company’s inability to detect and remove hateful and excessively violent posts.

Bloomberg reports that Facebook executives said in a blog post that the initiative is a vote of confidence in Europe’s tech sector, and that they want to see the completion of a digital single market and stability on international data flows.

“We look forward to working with governments across the EU to find the right people and the right markets to take this forward, as part of an upcoming recruitment drive across the region,” they said in the statement.

Facebook also said in July it was creating a product team to work on the metaverse which would be part of Facebook Reality Labs, its augmented reality and virtual reality group.

“This investment (in new jobs) is a vote of confidence in the strength of the European tech industry and the potential of European tech talent,” the company said.