Facebook Dark Mode For Android Spotted, May Roll Out Soon 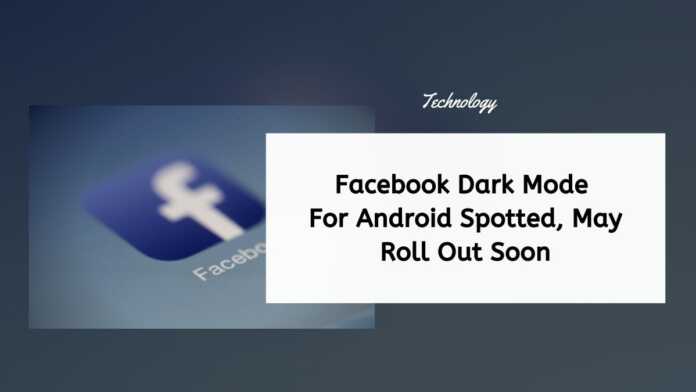 Facebook recently rolled out dark mode for its desktop app and now it’s working on getting a dark mode on Facebook’s Android app. Reports suggest more features like a coronavirus tracker are also in the works.

Facebook dark mode on Android was spotted by 9to5Google who shared screenshots of the same. The dark mode appears to be almost completely hinting at a stable release.

There’s an option to manually toggle on/off dark mode on Facebook or choose to set it by default from Android 10’s system-wide dark theme option.

It’s surprising why Facebook still hasn’t rolled out dark mode to its Android and iOS apps. Other apps like Instagram, Messenger, and even Facebook Lite have had a dark mode for a long time. But the wait seems to be ending soon with this discovery.

Facebook is also working on a coronavirus tracker within its Android app. This tracker shows local coronavirus cases over the course of three weeks.

It also shows country-wide cases calculated on the basis of seven days. On top, the tracker will show the number of confirmed cases globally. It’s likely that Facebook will launch this feature first in the US before rolling it out globally.

The “Time on Facebook” section is also getting revamped with a new UI. This is Facebook’s Digital Wellbeing feature that shows how much time you’ve spent on Facebook on a weekly basis.

Time on Facebook now shows a grid-based UI with better separations for different sections. There were no new features discovered though.