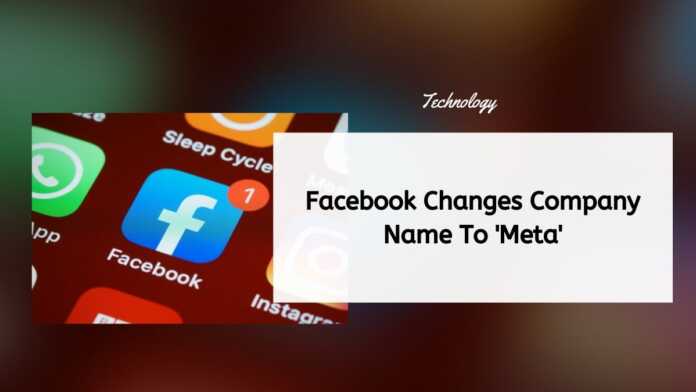 Facebook chief Mark Zuckerberg announced the parent company’s name is being changed to “Meta” to represent a future beyond just its troubled social network.

The name change comes as the company battles criticisms from lawmakers and regulators over its market power, its algorithmic decisions and the policing of abuses on its platforms.

“Right now, our brand is so tightly linked to one product that it can’t possibly represent everything that we’re doing today, let alone in the future,” he said.

“We’ve learned a lot from struggling with social issues and living under closed platforms, and now it is time to take everything that we’ve learned and help build the next chapter,” Zuckerberg said.

The social media giant has been battling a fresh crisis since former employee Frances Haugen leaked reams of internal studies showing executives knew of their sites’ potential for harm, prompting a renewed US push for regulation.

Facebook has been hit by major crises previously, but the current view behind the curtain of the insular company has fueled a frenzy of scathing reports and scrutiny from US regulators.

“Good faith criticism helps us get better, but my view is that what we are seeing is a coordinated effort to selectively use leaked documents to paint a false picture of our company,” Zuckerberg said in an earnings call on Monday.

The Washington Post last month suggested that Facebook’s interest in the metaverse is “part of a broader push to rehabilitate the company’s reputation with policymakers and reposition Facebook to shape the regulation of next-wave Internet technologies.”

The tech giant said the change would bring together its different apps and technologies under one new brand. It said it would not change its corporate structure. The names of the apps that it builds — Facebook, Instagram, Messenger and WhatsApp — will remain the same.

Further, the company unveiled a new sign at its headquarters in Menlo Park, California, on Thursday, replacing its thumbs-up “Like” logo with a blue infinity shape.