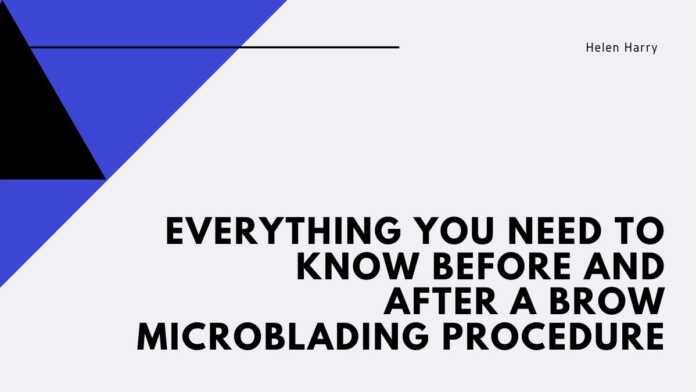 Melbourne, the capital city of the state of Victoria, is one of Australia’s most populated cities. It has a vast metropolitan area composed of 31 municipalities, where 4,967,733 people reside.

Commonly referred to as the country’s cultural capital, the city earned global recognition as a hub for the arts, entertainment, and sports. It is the home for several festivals and cultural events where people flock annually, including the grand Melbourne International Arts Festival, the Melbourne Fringe Festival, and the Moomba, the country’s biggest free community festival.

Since Melbourne has a colorful culture, you can expect to see the people residing in it to match the beauty of the city. They often make themselves presentable to fit in the picturesque surroundings.

But to cut down their time in putting on makeup, some Melburnians would opt to have some long-lasting beauty solutions like microblading, so they no longer have to fix their brows every day. It prompted the rise of more studios offering microblading tattoos in Melbourne.

To make sure that the effects of microblading would last for a long time, those who have it done need to follow some guidelines to avoid premature fading. If you are considering getting a microblading tattoo procedure in the city, here are several things that you need to keep in mind before and after your appointment.

Before Your Microblading Procedure

The technicians from salons offering microblading tattoos in Melbourne would advise you to follow a specific set of rules before you have your procedure. These will help make your microblading treatment less uncomfortable and provide better results.

First, they will remind you to avoid drinking caffeine or alcohol for at least one day before the scheduled appointment.

Avoid taking medicines like aspirin, ibuprofen, vitamin E, and fish oil supplements since these are blood thinners, which can make you bleed during the tattoo process. They would also suggest avoiding doing anything with your brows like tweezing, threading, or waxing five days before the procedure.

It will also help if you come in comfortable clothes during the day of your microblading schedule. To make you more comfortable during the long hours of lying down, you can bring your headphones so you can listen to your favorite music while waiting for the entire process to be over.

If you have an ideal brow color or shape in mind, you may point it out to your microblading technician before you begin with your procedure.

After Your Microblading Procedure

Twenty four hours after your procedure, keep the brow area dry and blot it once every hour using a tissue. You may immediately experience tenderness, swelling, and redness of your skin after the treatment.

These conditions are natural but expect it to subside after at least four days. You may also see some bruising in the brow area, but it will reduce in the next two weeks. If your skin begins to itch and flake after approximately five days after the procedure, avoid scratching and picking at it because it will only prolong the healing process.

Also, you might want to prevent the direct heat of the sun from touching your brows until the area heals, so try to fend off the thought of hanging out in one of the best Melbourne parks for a while.

The microblading salon may provide you with an after-care serum and cream to help protect the microblade brows. The serum works to speed up the healing process, while the cream will protect the area from infection.

Sweat-inducing activities and direct contact with water should also be on hold for at least a week, and using cosmetics in the treated area must discontinue until the skin around it heals completely.

You may not see your desired results right away since the area might peel and fade several days after the procedure. But you do not need to panic since those signs are part of the microblading healing process.

But the new color of your brows will eventually even out after a while. It can provide you with the brows of your dreams that you can only achieve through microblading. Once the healing process is over, you can begin to proudly walk down the streets of Melbourne to flaunt your new brows.