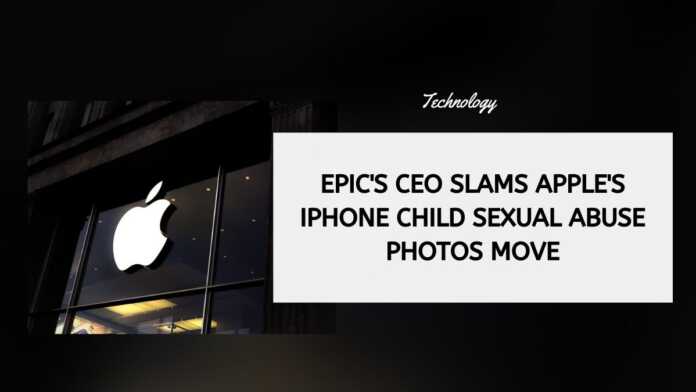 Apple previously stated that it may look into users iPhones and check for child abuse photos when they are being uploaded onto iCloud in an attempt to wipe out this horrific online crime.

However, while the attempt to address this issue has been on the agenda of all tech majors, this move by Apple has been blasted by others as it is likely to cause more problems for them. The first to react was WhatsApp Head Will Cathcart and then Fortnite-game maker Epic Games CEO, Tin Sweeney.

Apple has launched various tools to reduce the spread of child sexual abuse material (CSAM). This will introduce changes in iMessage, Siri, and Search, that would enable scanning iCloud Photos for known CSAM imagery and thereby help protect children online.

The first to launch an attack on Apple was WhatsApp Head Will Cathcart. Mincing no words he slammed Apple over this move and he even rolled out Apple chief Tim Cook’s letter to customers saying the iPhone maker would never allow an outside agency to look into what is on user’s gadgets. Now, Apple was doing the opposite, he indicated.

WhatsApp has been facing governmental pressure to decrypt its fully encrypted messaging system so that governments can see what users are sending to end extremist activities and hold people causing social conflicts to the task.

WhatsApp has said no to such efforts, but clearly, Apple is looking at being more flexible even though it says that it would never allow anything except child abuse photos to be analyzed. Apple move is likely to make governments bring more pressure to bear on WhatsApp to follow suit.

Sweeney took to Twitter and said, “I’ve tried hard to see this from Apple’s point of view. But inescapably, this is government spyware installed by Apple based on a presumption of guilt. Though Apple wrote the code, its function is to scan personal data and report it to the government”. “But this is peoples’ private data,” Sweeney protested in his Twitter thread.

He added, “Though Apple has since changed the signup flow, many were forced to take at-icloud-dot-com email accounts that can’t be deleted without losing everything ever purchased in the Apple ecosystem. That’s iCloud, so will presumably be monitored by police.”

Sweeney went to the extent of tweeting something even more damning, “So presumably Apple will now be an arm of state surveillance wherever it’s required. That’s already played out in China:”