Microsoft is encouraging users to upgrade from Flash Player to more secure standards. 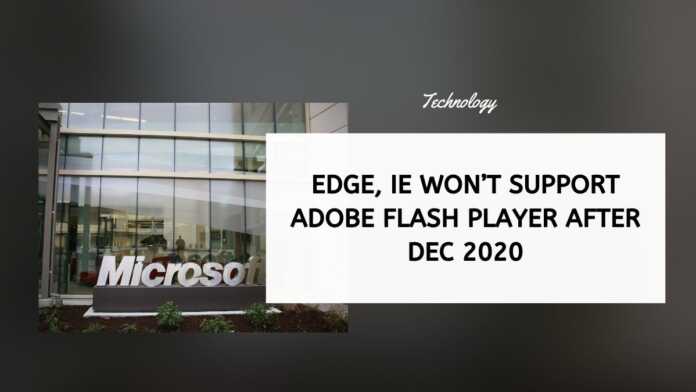 Microsoft has already announced plans to end the support for Adobe Flash Player by the end of December 2020. The move is aimed at helping the web move to more secure options such as HTML5, WebGL, and WebAssembly. Now, Microsoft has shared a roadmap sorts on how it is going to phase out the Flash player.

First, Microsoft will end support for Adobe Flash Player on Edge browser including the latest Edge and legacy version and Internet Explorer 11 by the end of this year.

Microsoft said it is going to completely remove Adobe Flash Player from the new Edge by January 2021. After December 2020, users will no longer get “Security Update for Adobe Flash Player” from the company. This is also applicable to the Edge Legacy and Internet Explorer.

On the device running versions older than KB4561600, Flash Player will be disabled by default by January 2021.

Later in 2021, Microsoft will remove all the APIs, group policies, and user interfaces that oversee the behavior of Adobe Flash Player from the legacy Edge and IE 11.

It is worth noting that Microsoft will continue to deliver security updates to Flash Player through the end of 2020. This will also include OS and browser compatibility support.

The company is also giving some tools to enterprise users who may still rely on the Flash Player after the end of the support.

“To aid such customers, Microsoft Edge will allow Adobe Flash Player to load as a plug-in via the Internet Explorer mode feature. Inherently, Internet Explorer 11 will also allow this. Once you make the switch from Microsoft provided Adobe Flash Player, it will be treated as any other third-party plug-in and will not receive Customer Support from Microsoft,” said the company in a post.